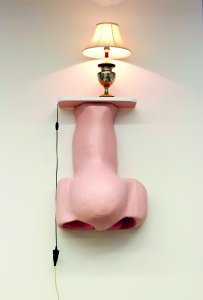 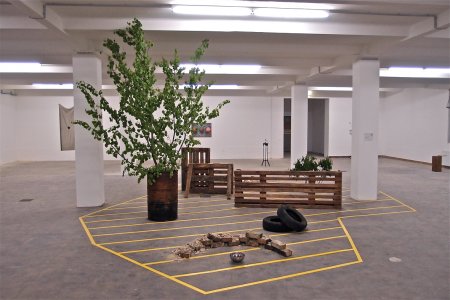 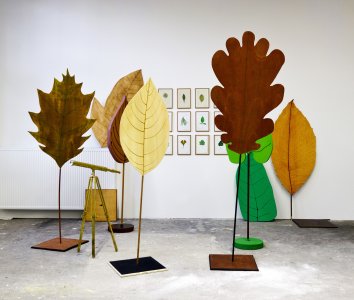 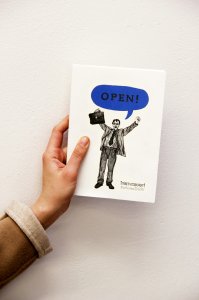 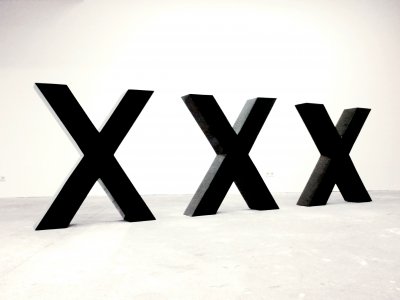 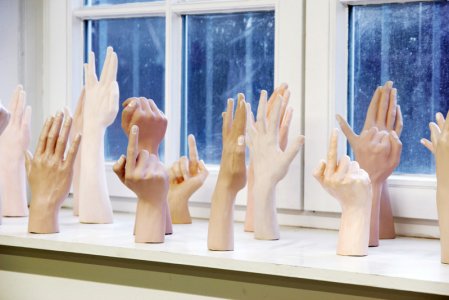 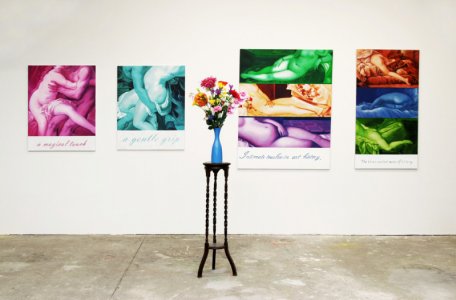 A pink, nose-shaped pedestal mounted on a wall (Nasensockel, 2011), brightly colored ice floes as spatial demarcators, a carpet overgrown with diverse types of knifes, a collection of handmade binoculars, paintings – some produced by third parties – with Rubenesque women lounging in front of neon backdrops (A gentle grip, 2011) or a windowsill full of porcelain hands, flamboyantly reaching towards the sky (Handarbeit, 2011): Katharina von Dolffs’ transgressive sculptures, paintings, films, installations and collections of objects are inherently related to humour.

Von Dolffs’ artistic position is closely connected to the Arts and Crafts movement as well as US conceptual art of the 60’s and 70’s. Her works take pleasure in irritation, questioning the pseudo-neutrality of the white cube, the differentiation between high and popular culture as well as hierarchies within the arts. In Katharina von Dolffs’ performative artwork, the transitions between art and non-art as well as between reality and performance are subjected to scrutiny.

For the exhibition Satellite Affects and Other Lines of Flight (2015) organized by District, von Dolffs created the multimedia installation Grillion/Atlas for the Planet Grillion, an encyclopedia of single-, double- and triple celled beings. The project resides between the astronomical cabinet, “studiolo” and diorama. The apocalyptic birth of the planet Grillion from the womb of an “Earth woman” has destroyed the earth, and all of its lifeforms, in its time-rattling expansion. The pocket atlas describes the new biodiversity of Grillion, hybrid beings that multiply through sexual hyper-practices and suffer from psycho-pathological dispositions. The possibility of sculpturally probing the arousal of these techno-biological planetary subjects allows von Dolffs’ western knowledge about outer space and feminist science fiction to collide, and in doing so, blurs the fine line between cosmic fiction and reality.