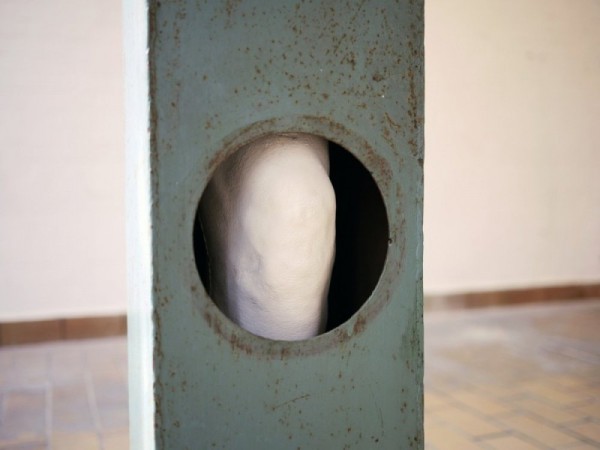 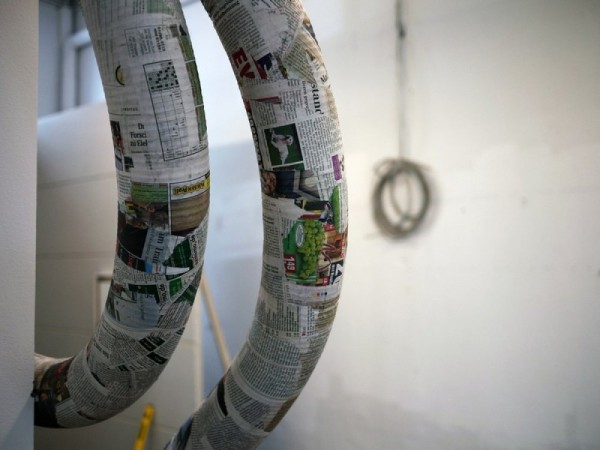 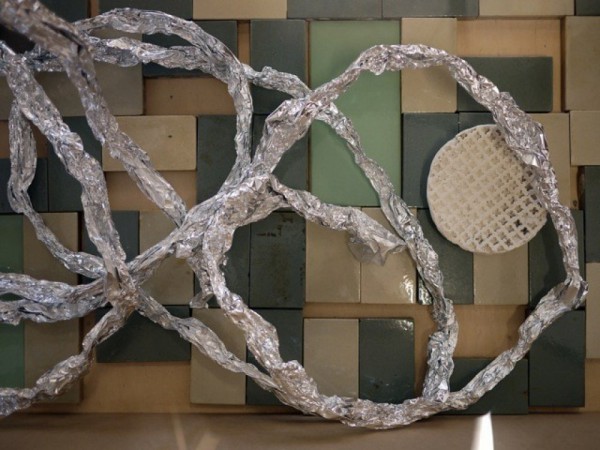 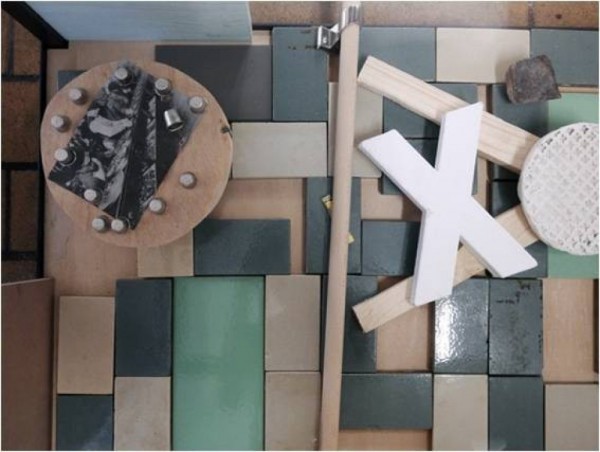 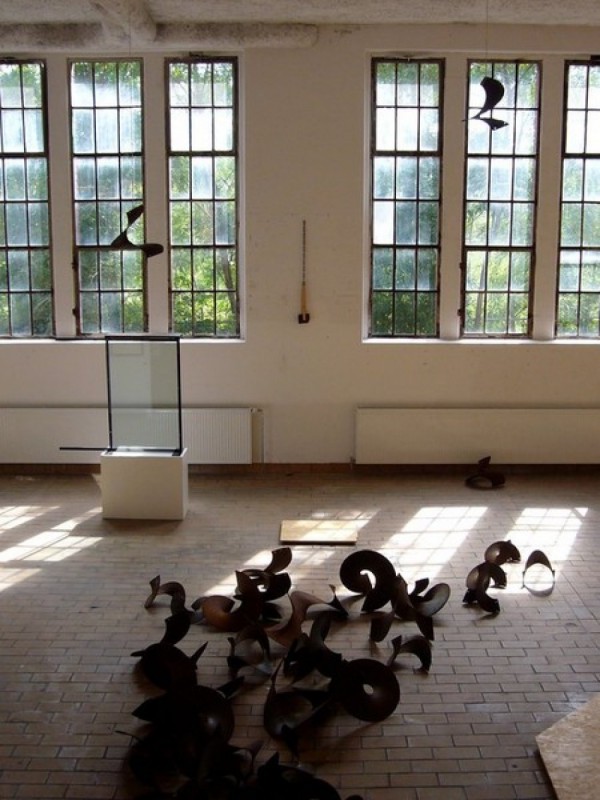 With Where there was ‘Fabrik’ there shall be Factory District presents an extensive installation by Misha Stroj – conceived by the artist particularly for the institution – and inaugurates a new site for art in Berlin on the grounds of a former malthouse in Berlin Schöneberg.

Misha Stroj ranks among the most important members of the Austrian art scene. The main emphasis of his artistic work lies on involvement with the exhibition space and site in which the exhibition takes place. Based on an preliminary analysis of the institution, Stroj develops a concept that utilises the specific spatial situation of the institution, engaging both the existing architecture and its social environment. The results are often objects and/or installations which unite different media, such as graphic arts, photography and text. Despite its roots in the tradition of conceptual art, work by Misha Stroj is to be understood as sculpture, oscillating between the artistic object and its spatial environment.

The ordinary is the focal point of Stroj’s contemporary evaluation. His work immediately betrays the artist’s interest in the objects of everyday life and the materials of its direct environment. Stroj’s objets trouvés’ identity and specific history are analysed based only upon their appearance. He really goes to work on these objects, they are altered, disassembled, deformed, adapted, reassembled, combined and reinterpreted as poetically realistic installations. Both the space that they occupy and the space that surrounds them are of essential importance for their impact.

Stroj dedicates himself to physical situations in their relation to social reality. His explorations aim at fundamental questions of the handling of objects, of their objectivity, their conditionality and distinct logic as well as their appropriation, traditions and promises. On the basis of the elementary and material qualities of commonplaceness, Stroj tries to track down the nature of things and make their inconspicuous phenomena visible.

Sometimes he reveals their character precisely through their inauthenticity, lending his objects a ghostly presence. Stroj opposes “the state of affairs.” He tries to evoke free forms and to introduce other structures of logic. He charts a realm beyond earthly purposes, a language of objects, which becomes perceptible only in complete detachedness. On the occasion of the opening exhibition of the District, Misha Stroj presents a piece based on an analysis of institutional art presentation. The arrangement of objects and materials in the nearly 500 square metre sized hall of the former winery reflects the prerequisites of a museum exhibition.

On various levels, the artist showcases characteristics of today’s art world, respectively the places in which art is negotiated. Plywood panels on the ground not only refer to the industrial use of the space, but also allude to the established, wilfully neutral mastic asphalt floor in gallery and exhibition spaces. Stylised almost as a physical stipulation for exhibitions, these floors without characteristic qualities stand out from their respective buildings as clearly defined fittings, without questioning the social function of their architectural surrounding, their location. Stroj takes this discursive experiment further in a row of white partition walls, built with the simplest means, which suggest a clean, clinically white room within the room in the middle of the space, which was previously used as a warehouse. As yet another tool in the kit of alteration and appropriation in institutional spatial arrangements, they reflect the question of optimal effect and perception conditions for art. Connected with the positioning of the things that they present – with the floor-and-wall pieces as well as the poetically light object formations made of string – they can simultaneously be understood as making a case for an eccentric way to show art.

In a manner less authoritarian than the white cube of the gallery and the institutional machinery of the museum whichdraw the line between art and non-art, a further group of work addresses the interface between art and reality, architecture and nature. In the midst of the associative play with criteria of temporary art environments a small metal trough stands, deliberate and unelaborate, in which the artist has planted beetroot (a herb from the family of goosefoot plants) especially for the exhibition. As a part of the natural world with all her peculiarities and uniquenesses, as a field and a meadow realm en miniature, it represents the exterior within an interior as well as the chaos of nature juxtaposed with the order of architecture. Across from this – as an indication of man-made nature – a column-like slim relic from the time the space was used as a malthouse protrudes, signifying both craftsmanship and nostalgia, seriality and rationality.

Along with the playful handling of different views of art – from the traditional work concept up to ephemeral manifestations – time and again the question of the relationship between artwork, site and viewer also plays a role in Stroj’s current work. Occasionally in the visual conceptions of the artist, who was born in 1974 in Ljubljana, the idea surfaces that more than only the one world known to us could exist. When the viewer enters the exhibition, he immediately encounters a sharp-edged, geometrical model with a ceiling and trusses, three vectors floating abruptly in its centre. Playful and subtle at the same time, they demonstrate the levels of tangible physical space to us, signalling that there could be more than the dimensions we are familiar with. A construction made of wood and metal, reminiscent of a shelf, also seems to refute the expectations made of it. With delicate twists and contortions, the fragile and unstable installation conveys the impression that it is countering the force of gravity, seeking a path to freedom.

Between the extensive, completely corporeal sculptures and objects the visitor also encounters economically accentuated, small and unspectacular object ensembles made of tiles, papers, photographies, spirals of strings, letters, wires, cords and nails. Due to their puzzling existence one could see them as a kind of poetic cipher, as they represent nothing more than what they are: free forms made of painted surfaces and lines. The white wall, the plinth and floor form the missing base for these autonomous pictoral elements. Only where the individual parts come together, where a line made of aluminum foil meets old multicoloured tiles, where a juxtaposition of lines and surfaces takes place, where lines render shapes, surface lines structure a field of view, where coloured surfaces refer to colour and represent something in their abstraction, do the objects receive their shape, can the materials of the elements reify something.

With this exhibition the District commences a series of exhibitions which support young, outstanding artists in the production of new works, and makes these publicly accessible for a substantial period of time.

The exhibition was curated by Susanne Modelsee and created under the patronage of the Ambassador of the Republic of Austria in Germany, Dr. Ralph Scheide.