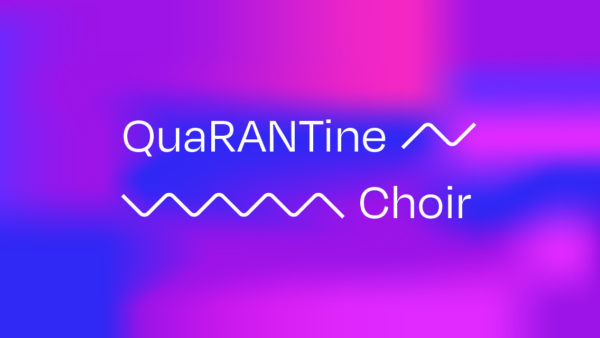 A Series of Audio Performances for Cell Phones

QuaRANTine Choir is a growing compilation of commissioned audio works by an international group of artists from various backgrounds. It is dedicated to the rant as an artistic format, motivated by feminist and queer perspectives. We understand the series as a scattered yet collective choir, that is delayed only by time and distance. Each artist departs from the previous rant hence adding a new voice to the QuaRANTine Choir.

For the digital community and audio project QuaRANTine Choir, we are inviting at least 10 artists and musicians to play around with whatever ranting and queer/feminist noise means to them and to create a short audio work. Cell phones or other mobile devices serve as recording as well as listening devices. Since each rant is sent to the next artist as starting material, the whole series also works as a slowed-down artistic chain reaction.

The first edition that ran from June 2nd to August 4th, 2020, functioned as a scattered yet collective choir, that was delayed only by time and distance.

Rant #1: Nora Turato
The first audio performance is by Nora Turato, an Amsterdam-based artist who in her performances uses a cacophony of voices and fuses a mixture of source materials in an attempt to dismantle the preconceived ideas of femininity. In her performances, artist Nora Turato incessantly calls for an “almost nonsensical desire to be loud, too much, unstable, possibly insane in public and to make something out of it,” largely because the general public seems not quite ready to have a woman shriek, rant, gossip, and whine at them, or stare them down.

Rant #2: Moriah Evans
Moriah Evans is a New York-based choreographer who works on and through forms of dance and performance. Her choreographies navigate utopic and dystopic potentials within choreography/dance/body, often approaching dance as a fleshy, matriarchal form between minimalism-excess.

Rant #3: Felicia Atkinson
The third track entitled “None of the Two Things” is by visual artist, experimental musician, and poet Félicia Atkinson. Félicia’s work deals with topics of deep listening, cut ups, silence, noise, and language and is a combination of improvisation and superimposed composition, as an abstract woven material, where the voice meets electronics, acoustic instruments, and electric distortions.

Rant #5: Astrit Ismaili
The fifth audio track is by Astrit Ismaili, an Amsterdam-based performance artist born in Pristina, Kosovo. Their work proposes bodies that consist of both imaginary and material realities, using alter egos, body extensions and wearable musical instruments to embody different possibilities for becoming. In Astrit’s practice the act of singing is used to explore the role of voice in pop culture and identity politics. Witnessing the Kosovo war, being a child pop star and identifying as a queer person are experiences that influence their practice.

Rant #6: Hanne Lippard
The sixth audio performance “Intestine!” is by Hanne Lippard, a Berlin-based artist whose practice playfully and wittily explores the voice as a medium and how language can be visually powerful. Lippard’s texts are rhythmic and performative often taking its context as a point of departure for a critical yet often humorous investigation that reveals flaws and defects of dominant normative structures.

Rant #7: Fauna
The seventh audio performance is by experimental club music producer Fauna who currently works and lives in Vienna. Oscillating between notions of technological self, political involvement, and impressions of daily life Fauna is phrasing dystopic-futuristic, movement-based tracks, whilst always highly depending on mood to respond to the individual context as well as to surrounding events and occurrences.

Rant #8: keyon gaskin
The eight audio performance is by Portland-based artist keyon gaskin. keyon gaskin prefers not to contextualize their art with their credentials.

Rant #9: Georgia Sagri
The ninth audio performance When you walk in the sea is by Athens-born artist Georgia Sagri. Sagri’s practice explores performance as an ever-evolving field within social and visual life via the engagement in political movements and struggles, particularly regarding issues of autonomy, empowerment and self-organization.

Rant #10: Nguyễn + Transitory
The 10th and final audio track is by Nguyễn + Transitory, who are Nguyễn Baly and Tara Transitory. Avoiding the use of samples, they work mainly with modular synthesizers and analog tape attempting to approach sound, synthesis, noise, rhythm, and performance from a less colonial lens – looking into how frequencies, the physicality of producing sounds and its incidental vibrations relate to cognitive memories, stored emotions and catharsis. Their practice involves as well efforts to empirically learn more about various Southeast Asian and diaspora queer existences and lost histories. Besides their artistic practice, they also run their own mastering studio Queer Ear Mastering.

For the Minneapolis Edition, an assorted group of artists, musicians, activists, and poets is invited to individually reflect on current events in and outside of Minneapolis/St. Paul.

Rant #1 Mpls Edition: Andrea Jenkins
The first audio performance of the Minneapolis Edition is by Andrea Jenkins, a politician, community leader, artist, and activist. Growing up in Chicago in the 1960s, Jenkins participated in the city’s emerging Black Arts Movement and discovered her voice as a poet. Once having moved to Minneapolis she served as a Council policy aide and oral historian for nearly two decades before becoming a city councilwoman. She is known for being the first African American openly transgender woman elected to public office in the U.S.

Rant #2 Mpls Edition: Maria Isa
The second audio track of the ‘Minneapolis Edition’ is by Maria Isa, a singer, songwriter, actress, rapper, activist, youth worker and recording artist born in Minnesota and raised on St. Paul’s West Side barrio. Isa grew up surrounded and influenced by many different rhythms of Afro-Latino-Indigenous culture and channeled it into performing arts and activism at a very early age. She studied with master musicians of Afro-Boricua music of Bomba and Plena of Puerto Rico, all of whom inspired Isa to create an Afro-LatinX and Hip-hop lyricism performance style.

Rant #3 Mpls Edition: Cameron Downey
The third audio track of the Minneapolis Edition entitled “And what if I took back all my praise?” is by Cameron Downey, an anti-disciplinary artist and environmental scientist. As a current senior at Columbia University, she explores concepts of world-building and liminal space by way of Black, fantastical and precarious bodies. Downey uses sculpture, film, photography, the written and the performed to engage and engulf a language of epics out of the minutiae.

Rant #4 Mpls Edition: Madeline Stillwell
The fourth audio track of the Minneapolis Edition is by Berlin-based artist Madeline Stillwell who grew up in and around Minneapolis and later studied Studio Art, Dance, Music & Theater south of the Twin Cities. Her live performances and videos combine material, body, and voice, often incorporating found or existing urban space. Stillwell is one of two Berlin-based participants of the QuaRANTine Choir Minneapolis Edition who tie the series back to Berlin opening up a dialogue between the two cities.

Rant#5 Minneapolis Edition: Ifrah Mansour
The fifth audio track of the Minneapolis Edition is by Ifrah Mansour, Somali, refugee, Muslim, multimedia artist, and educator. In her work, she interweaves poetry, oral stories, puppetry, video, and installation to explore trauma through the eyes of children as well as to uncover the resiliencies of Blacks, Muslims, and refugees, to confront violent history with humor, and to provide a voice for the global refugee stories.

Rant #7: Sarah White
The seventh audio track of the Minneapolis Edition is by Sarah White, a soulful songstress, DJ, photographer and hands-on healing artist whose work is examining how to liberate Black and Brown bodies during times of unveiling and upheaval. White’s deep melodic musical expression invades and haunts the sacred and spiritual space of her listeners while working deeply on the exploration of different ways of getting into the nervous and spirit body systems to unveil and heal trauma.

Rant #8: Kimberly Bradley
The eighth audio performance of the Minneapolis Edition is by Kimberly Bradley, a culture writer and editor since the 1990s. When Bradley writes, it’s often – but not always – about art or the art world. She was born in a California desert town and raised in northern Minnesota. After several years in Hamburg and a decade in New York, she moved to Berlin in the early 2000s where she still lives and works. Bradley is one of two Berlin-based participants of the QuaRANTine Choir Minneapolis Edition who tie the series back to Berlin opening up a dialogue between the two cities.

Rant #9: Sci-Fi
The ninth audio track of the Minneapolis Edition is by Sci-Fi, a rapper, DJ, and producer proudly hailing from the East Side of Saint Paul, Minnesota. Their work aims to utilize the power of nostalgia and its ability to guide our lives and heal our wounds. The feelings that drive Sci-Fi’s music can range from the sweet memories of teenage romance to reflecting on the pitfalls of life and how they make you appreciate how far you have come.

Rant #10: Deka
The tenth and final audio performance of the Minneapolis Edition is by Deka, a Somali American vocalist, DJ,  artist, and fashion designer from Minneapolis. Most of her tracks and mixes are inspired by the music of artists like NAAFI, a Mexico City-based artist collective and record label that is driving a new wave of Mexican electronic music, and NUXXE, a London-based label and collective producing cutting edge club sounds.