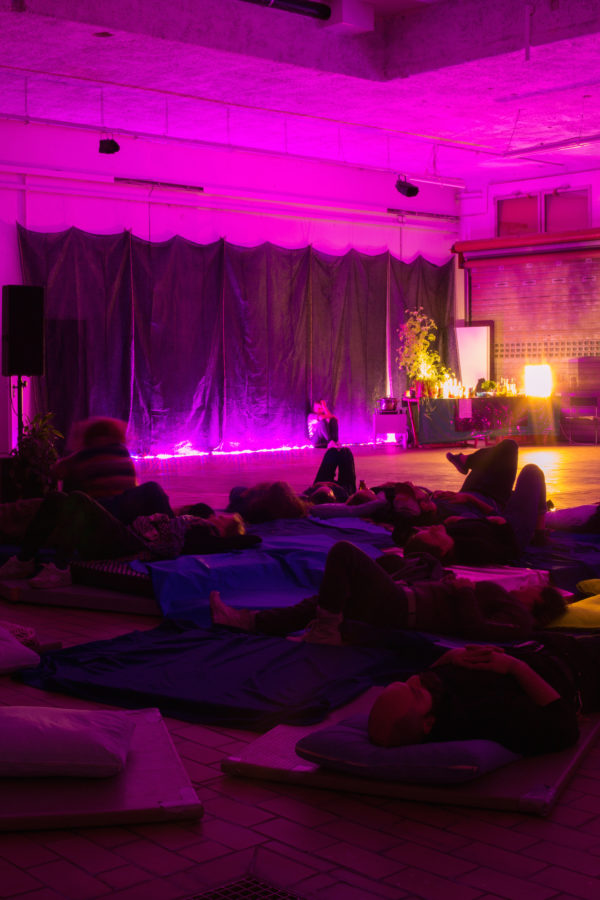 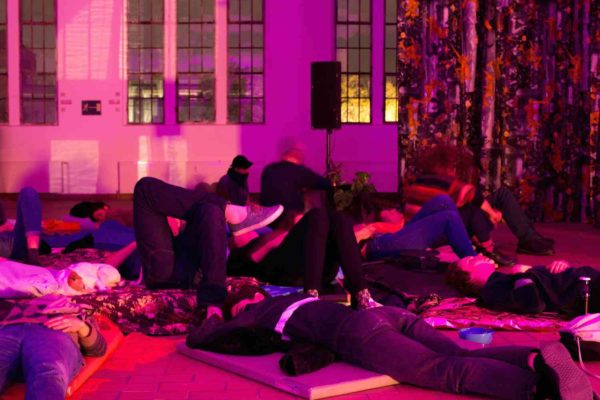 With an opening and ending meditation, conceived by Negarra A. Kudumu Mad Vibrations: A Humming Ritual for Untrustworthy Narrators side-steps the cruelty of colonial modernity, and focuses on the radical, renegade voices of decolonial struggles who demand different realities for themselves through various forms of self-care and exchanges via diasporic and pan-african networks, connections, echoes and re-sonances. These decolonial vibrations and voices found their waves and ways while experiencing prohibition and criminalization. By using improvised or coded language, dance, music or non-verbal communication, which was often read as inaudible, made from scratch, unreliable, inconsistent, mad and incomprehensible forms of exchanges between enslaved and colonial subjects people managed to move below the radar of the systems of slavery and colonialism.

„Certain kinds of madness, deliberately going mad… in order to not loose your mind. These strategies of survival made the truly modern person. They’re a response to predatory western phenomena.”  Toni Morrison

Maria Guggenbichler and Amal Alhaag are friends. They met over a shared love for music; hyperactive organizing of gatherings, programs and events of many formats and shapes and a deep investment in critical, ex-centric or counter cultural practices and thinking. Since 2014 they have collaborated on events, programs and pranks, together with other friends and people who became friends. The gatherings always involve bodies and minds coming together, listening and sharing (sometimes difficult and uncomfortable) conversation; and are very often full of laughter, dancing and joy. www.sideroom.org

The spatial setting for Mad Vibrations contains elements from the performative installation Freja Bäckman, I was told I chop wood like a ballet dancer, that happened in the same space earlier this year, and textures from knowbotiq’s performance b(l)ack dada: drone nonperformance.

Mad Vibrations is the second iteration of a collaborative and performative space that appears under different titles across the months of October and November 2018 at School Without Center / District and Archive Kabinett. Dada is Black, duh! * Mad Vibrations * manYdancing the digital ornament * Choreographic Unrest is a collaboration between aproduction e.V., Archive Kabinett, School Without Center/ District Berlin, the Institute for Contemporary Art Research /ZHdK and M.1 Arthur Boskamp-Stiftung initiated by Joerg Franzbecker, Suza Husse and Yvonne Wilhem/knowbotiq.