eteam: When the Dancing Gets too Stiff, the Rain Needs to Get Dug out as Ice-Cubes 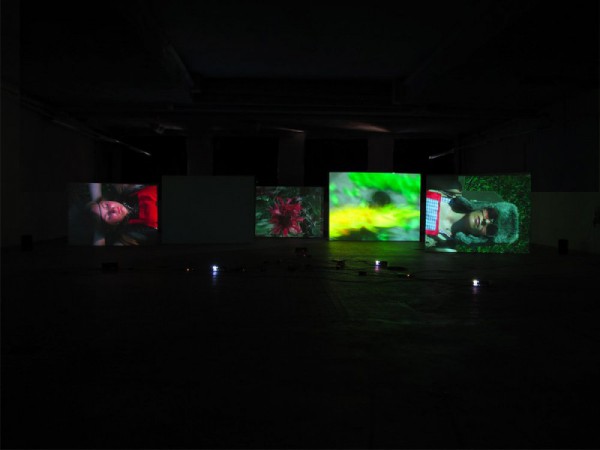 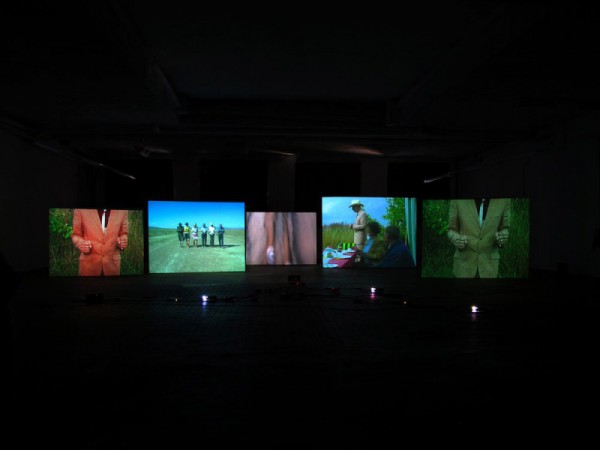 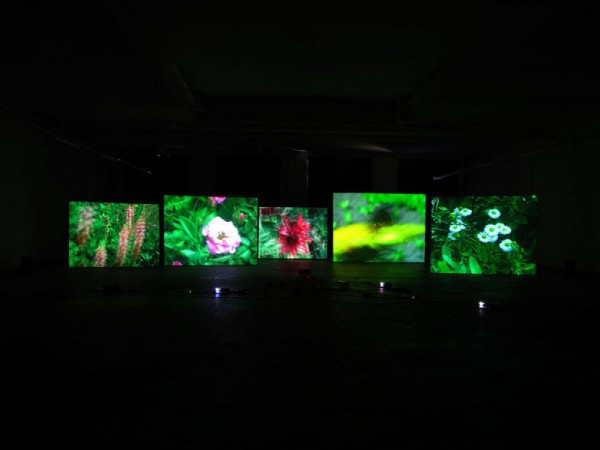 The artist group eteam from New York, consisting of Franziska Lamprecht und Hajoe Moderegger, is showing its 5-channel video installation When the dancing gets too stiff, the rain needs to get dug out as ice- cubes (2011) in Berlin. A couple of years ago the artist duo purchased two sleepy pieces of land on ebay, one lying close to Dewitz in Mecklenburg-Hither Pomerania, the other one close to the town Oasis in the desert of Nevada. In both places, the people suffer from water shortage and start to get inventive. Soon, the thin red line between reality and fiction breaks in. This exhibition applies itself to the subject ‚Art and Sustainability’ from an artistic perspective through associatively questioning the proposals of meaning as well as the potentials of our life time.

The 5-channel video installation When the dancing gets too stiff, the rain needs to get dug out as ice-cubes (2011) by the artist duo eteam is shown in Berlin for the first time on occasion of the summerparty on the subject of sustainability at the Malzfabrik.

Eteam is an artist group from new York, that has realised many projects in the past that have a visionary, collaborative and humorous character (including How to Videos 2000-2002; 1.1 Acre Flat Screen 2002-2004; Doddy and Chrystal 2003; International Airport Montello 2005-2007). In 2008, Franziska Lamprecht and Hajoe Moderegger purchased an area of 3.300 sq. m. close to the small town Dewitz in Mecklenburg-Hither Pomerania, two hours north of Berlin. At the same time, they bought a piece of land in the desert of Nevada, wildly overgrown and populated by herds of cows. While in Dewitz there is a partly abandoned and overaged allotment garden colony waiting for a new tenant, we find local mine workers in Nevada who live in the neighbouring community Oasis. Both parties share the same concern: they complain about water shortage. The allotment gardeners need water for their vegetable gardens and the inhabitants of Oasis need it for their living. This motif of the search for water is the starting point for an eventful experiment with the inhabitants that doesn’t considerably distinguish between reality and fiction. The music and the line-dance below the garden pavilion are elements of the entertainment programme on board of the MS Dewitz on its cruise over the Atlantic to America (‚OS Grabeland’). What is it with this idea of a performative journey?

In computing, ‚Open Source’ stands for license-free software that makes the source code accessible for all users. Eteam divorces this term from its original context and attaches a new meaning to Open Source. They understand OS as something virtual that can be reached by people by means of their own capability and actions, the digging and the dancing. The thoughts of the tenants in Dewitz often revolve around the death while the people in Oasis dig for ice-cubes in mines. These crystals stand for a rare resource that one collects in order to sell it – just as elementary are the dreams, fantasies and wishes of the inhabitants. A symbolic spring is opened through the balance between working and letting go.

Eteam succeeds in When the dancing gets too stiff, the rain needs to get dug out as ice-cubes with associatively calling attention to the meanings and potential of our life time. Although the sites Dewitz and Oasis are located away from cultural centres, the people in both places are exposed to a circular flow of leisure time, working and consumption. As soon as this dance becomes too stiff, it is possible to think of new things and mentally move into another direction. A cruise in the Mecklenburg-Hither Pomerania flat country and an iceberg in the desert reveal that it is not necessary to physically leave the place in which one misses something but rather that it makes sense to occasionally catch the rain together. This social and positive philosophy of life is an important comment on our present time since it poses the question of the human basic needs in a new manner.