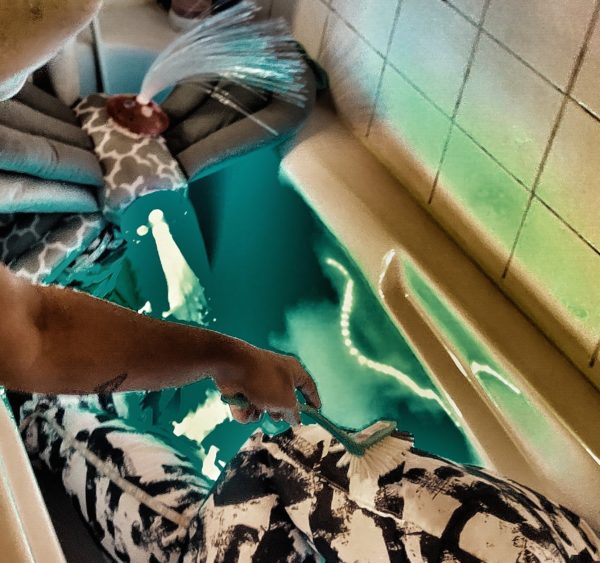 Promona Sengupta, Milktooth (theatre piece), production still, 2020 (Photo of a soft cushiony creature relaxing inside a bathtub while a human hand holding a brush cleans it) 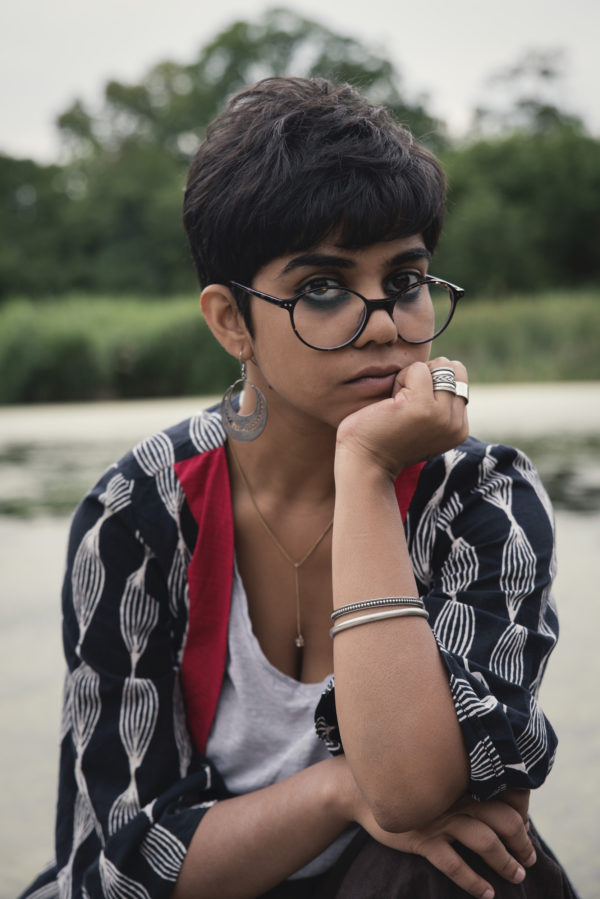 We are thrilled to announce Promona Sengupta as the new Studio & Research Grant holder. From November 2020 to March 2021 she will work at District and collaborate on a language where yesterday and tomorrow are the same word. Kal.

Speaking Barnacular: Watery Sanctuaries is an exercise in liberatory speculation, drawing inspiration primarily from worldbuilding, science fiction and anticolonial activism, congruous discourses that need to be deployed together for purposes of creating new worlds. The project proposes to look at swimming, flotation, deep-water diving techniques, controlled drowning, underwater breathing and altered states of human consciousness in the oceanic womb as socio-politically rooted practices of dissident history and material culture.

With the refugee boat hanging over our collective consciousness in the most perverse fashion, we know the time has come that we all learn how to imaginatively survive real-time white supremacist, capitalist, fascist, anti-minority worlds. If the earth won’t be ours, the waters will be. Water is a historical category for colonized bodies, inextricably linked with intergenerational body memories of the middle passage, as well as those of racially segregated pools in Apartheid. In the South Asian subcontinent, the kalapani becomes a complex concept of “water-crossing” that changes its meaning from caste-prescriptive travel restrictions to a moniker for the Cellular Jail, a British colonial prison in the Andaman and Nicobar Islands that till date plays a significant role in the mythos around the Indian colonial experience.

It is time to take back control over our waters, train ourselves to take to the water, surrender to the lightness of buoyancy instead of the heaviness of gravity, learn how to control our breath and learn to live like our oldest ancestors, the humble yet fascinating barnacle. An Archimedean world instead of a Newtonian one.

Promona Sengupta is an academic, an activist and a curator currently finishing her PhD at the International Research Center: Interweaving Performance Cultures, at FU Berlin. She co-founded Mo’Halla along with Jyothidas KV and Prabhas Tripathy, a pop-up space for progressive art, culture and politics, based in Berlin. She was part of the Young Curators Academy at Maxim Gorki Theater as part of the Hebstsalon 2019.

Along with collaborators and voices from various BIPOC art and activist communities in Berlin, she will be producing a set of manifestos and conversations, fictional, non-fictional and pictorial, for barnacular speech – a speculative system of communication, combining scuba diving signals, sign language and newly acquired techniques of bubble-making, for when one is under water.

a language where yesterday and tomorrow are the same word. Kal.
kal is organized by Aziz Sohail and The Many Headed Hydra at District Berlin, in collaboration with Archive Books. kal is supported by the Department for Culture and Europe in the Berlin Senate, the Goethe Institut Karachi and ifa.