When The Jackal Leaves The Sun: Decentering Restitution | Pedagogies of Repossession 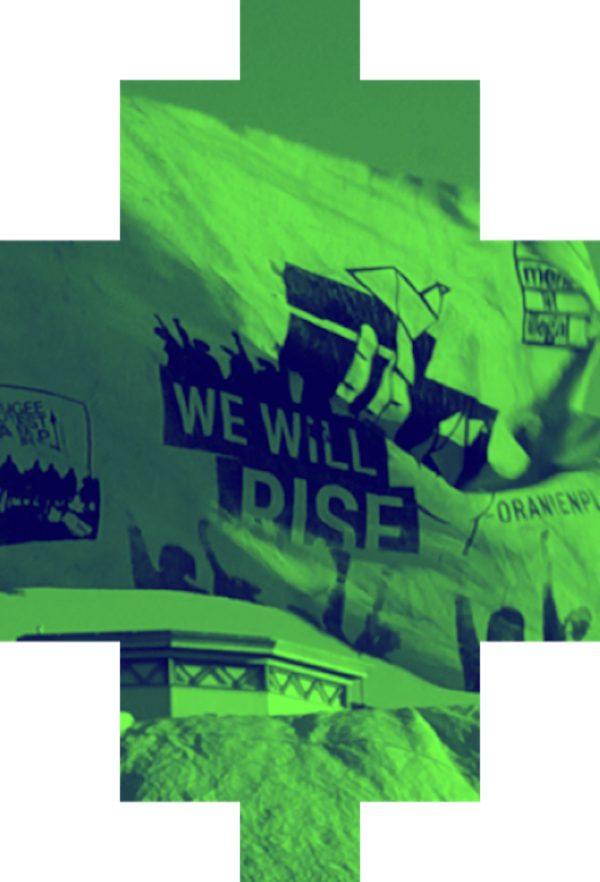 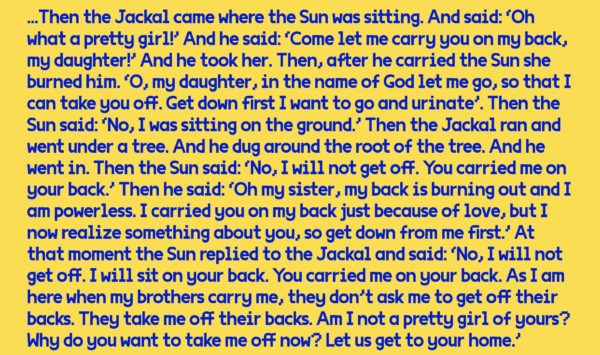 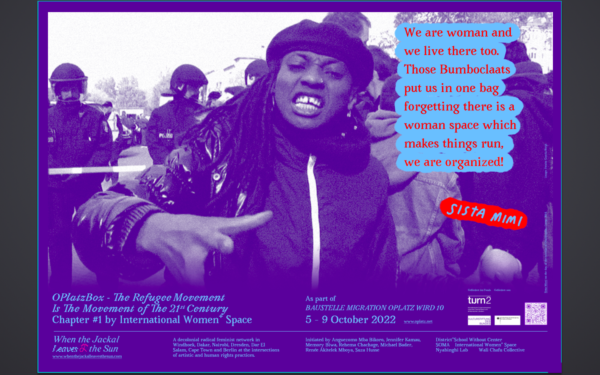 “Colonialism will burn you like the sun on a jackal’s back.”
– Hendrik Witbooi writing to Theodor Leutwein, 1894

The Jackal and the Sun is a popular children’s tale that was transformed many times as it was passed on orally and traveled from the Arabic regions and North Africa and, with influences of the European fable Reynard the Fox, arrived to Southern Africa. The ancient tale of the Jackal trickster getting their back burned from trying to carry the Sun away continues to appear and intervene in the colonial archives of German colonization in Namibia. The voices of Haneb and Wilfred Tjueza, young farmers in Namibia, are recorded telling the story in 1931 to the ears and sound recording device of a white anthropologist.

The story was told in different locations and languages over generations to become an anchoring metaphor for people’s experiences of colonial oppression and injustice. Prominently, Hendrik Witbooi, leader of the Nama people’s resistance against German imperialism, in a letter to Samuel Maherero in 1890, used the metaphor to express his grave concern against signing the so called protection treaty with the German Empire:

“But what you have done now, surrendering yourself over to the government by another, by White people, thinking it is wisely planned that will become to you like carrying the sun on your back.” (Lau 1995, p. 55)

German colonial agreements and contracts were used to bind only one side and later ignored and overstepped by the colonisers at will. With the arrival of the colonising forces, anti-colonial resistance begun, too, in the form of counter-narratives carrying African cosmologies like in Hendrik Wittboi’s letter or in the form of armed resistance by Ovaherero, Nama, San and the Khowesin people against their dispossession and displacement. The violent colonial war and genocide in Namibia was the response by the German Colonial Empire to this anticolonial struggle.

What does it take, for the Jackal, to leave the Sun?

The transnational exploitative relations created by German colonialism persist to this day, albeit often in a new guise. The continuous, intersecting systems of domination live on not only along economic lines, but through cultural and social structures. Restitution and redistribution of stolen land and cultural artefacts as well as reparations for the countless dead are mostly absent, the unspeakable traumas of colonialism are present all around. Thousands of bodies of ancestors of many African communities to this day remain in the basements and archives of German museum and university collections: without a grave, without a memorial.

“Germany is in violation of its human rights obligations under the International Convention on the Elimination of All Forms of Racial Discrimination. The repatriation of ancestral human remains is a human and fundamental right of those persons whose human remains are stored in the archives of German institutions in an inhumane manner, and of their descendants.” – Sarah Imani

On the occasion of the first return of twenty bodies that had been despoiled during the colonial war in Namibia for scientific research in Germany, to Windhoek in 2011, practices of repossession were carried out by a delegation of representatives of the descendants. Through an interaction of speeches, sartorial, and site-specific performances at the Charité and other sites in Berlin, the delegation activated memory in a reciprocal exchange between ancestors and the living that opened up new relationships to the self and the collective. When The Jackal Leaves The Sun takes inspiration from these embodied forms of building memory through repossession as procedures to reclaim bodies and counter the violent dispossessions of colonialism.

When the Jackal leaves the Sun aims to amplify descendants’ and indigenous communities’ demands for return, repair and land redistribution and to foster artistic and political forms of countering colonial dispossessions on a cultural, educational and spiritual level.

Like the Jackal’s marks from the Sun, our cultures and ecologies, our relationships and economies are marked by colonialism. When the Jackal leaves the Sun connects an intersectional spectrum of artists, curators, activists, lawyers, cultural practitioners and collectives, to create interventions and pedagogical tools that attend to both the processes that led to the historical catastrophe of colonialism and to the powerful legacies of anti-colonial resistance.

Grounded in radical Black, queer and feminist positions, the project’s objective is to decenter restitution discourses and practices of hegemonic institutions and move toward the co-creation and dissemination of pedagogies of repossession.

To achieve this, When The Jackal Leaves The Sun creates an independent and transterritorial infrastructure and platform for artistic and transdisciplinary collaborations on memory, cultural and educational work from summer 2022 to spring 2024 in Nairobi, Windhoek, Kigali, Dresden, Dar Es Salam, Dakar and Berlin.

When The Jackal Leaves The Sun. Decentering Restitution | Pedagogies of Repossession unfolds through six chapters of interventionist and research-based cultural and artistic practices, accompanied by international legal expertise and activist engagement. The process of developing the project and its chapters is centered around anti-colonial resistance struggles on the African continent and in Germany in order to gain a deeper understanding of the variety of transnational relationalities that exist and alliances to be formed, that can pave the way for a collective, transdisciplinary process of creating decolonial tools and resources.

International Women* Space and Soma Collective propose performative architectures in public spaces in Berlin and Dar es Salaam. The OplatzBox stands as a monument of resistance of Black women* refugees addressing the repercussions of the colonial enterprise with regards to migration to Europe. Rehema Chachage’s Nitakujengea Kinyumba Na Vikuta Vya Kupitia (A Home For You I Will Create With Exit Pathways) is a collective intervention in Bagamoyo, the once designated capital of German [occupied] East Africa, that interrogates colonial cartography and aims to build a home with exit pathways through traditionally female architecture.

Chapter #3 by Memory Biwa and Chapter #4 by District* School without Center create community-led and interdisciplinary forms and tools of learning and storytelling. Together with a group of artists and intellectuals, Memory Biwa imagines extracurricular resources on anti-colonial resistance and memorial processes in Namibia. District*School without Center and collaborators will be engaging with the relationships of dispossession and fiction at the intersections of colonial agriculture, genocide and landownership, and their colonial continuities.

Wali Chafu collective in Nairobi & Dakar and curators Anguezomo Mba Bikoro & Roseline Olang’ Odhiambo in Berlin excavate and elastify the gap of accountability in current restitution discourses. Chapter #6 The Blue Book Women* presents intertemporal and intersectional approaches in regards to the history and present of human trafficking, Chapter #5 A Lullaby For A Small Death initiates collective ways of re-thinking the practice of restitution through ancestral healing in storytelling and mourning rituals in relation to the return of ancestral bodies to the continent.

#5 Lullaby for a Small Death

WHEN THE JACKAL LEAVES THE SUN: Decentering Restitution | Pedagogies of Repossession is funded by the TURN2 Fund of the Kulturstiftung des Bundes (German Federal Cultural Foundation). Funded by the Beauftragte der Bundesregierung für Kultur und Medien (Federal Government Commissioner for Culture and the Media).