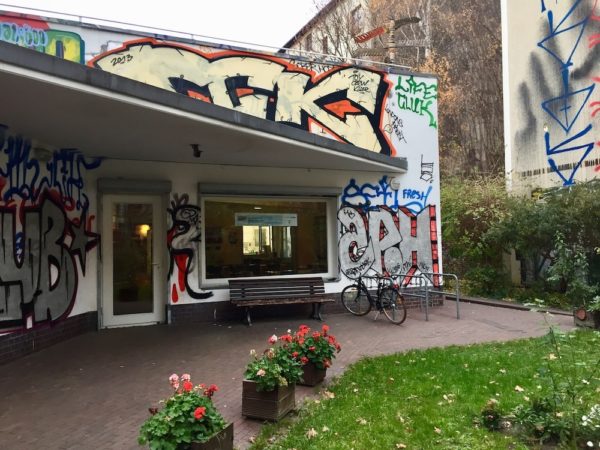 Workshop in Turkish language. Participation is free, no prior knowledge required. There will be snacks and drinks. Please register at pinarogrenci@yahoo.com.

The “Newcomers” project has been devised based on a book, “Open Architecture: Migration, Citizenship and the Urban Renewal of Berlin-Kreuzberg by IBA-1984-87,” written by architect and researcher Esra Akcan. Esra Akcan’s critical reflections on the status of the noncitizen in the built environment give us a theory of open architecture and help extend our thinking on issues of pressing contemporary concern -democracy and human rights.

The IBA 1984-87 project was an international architecture competition aimed at reconstruction of areas damaged or destroyed in the Kreuzberg district during World War II, and fulfillment of social housing needs. IBA 1984-87 project differs from other IBA projects by making “participation” policy its main theme, and including migrants in the relevant housing production process. In the preliminary stages of this process, in Kreuzberg, migrant groups predominantly from Turkey came together with other communities and formed a substantial resistance, objecting to their exclusion from planning processes, and demanding preservation of existing buildings through renovation instead of demolishing them.

While trying to explore the IBA 1984-87 buildings in Kreuzberg based on the “Open Architecture” book, Öğrenci discovers the non-governmental organizations with origins in Turkey, that are located in or around the IBA buildings, and conducts interviews with the employees of these organizations. The interviews focusing on topics such as education, housing, language, discrimination and civil rights, together with the transformation of the profile of immigrants from Turkey in Berlin from 1960s until now, also cover a variety of topics including the fall of the Berlin Wall’s impact on immigrants, increasing rents in the recent years, and the latest generation of migrants who migrated to Berlin due to political conditions. The efforts of migrant groups from Turkey coming together with other Berlin based activist groups since 1970s in order to transform the urban renewal policies within the context of Kreuzberg can be seen as one of the pioneering movements that became a source of the current resistance, solidarity and collective action culture in Berlin.

Öğrenci attempts to read the “participation” policy of the IBA 1984-87 housing project via “participation” policies carried out by societies and associations, which consist of varying ethnic or political groups from Turkey. The workshop will take place at the Kreuzberg Museum, which hosts a vast archive of resistance movements regarding migrant rights, housing and urban policies, and will be open to participants who are under 30 years of age. During the workshop, in which experiences of various migrant groups will be discussed, the participants will visit the permanent exhibition in the Friedrichshain Kreuzberg Museum, and there will be a tour of “Neu Bau” and “Alt Bau” IBA buildings -designed and renovated in accordance with participation policy- around Kottbusser Tor, Adalbert Strasse and Schlesisches Tor. Also, Öğrenci will present the preliminary stages of her research on Turkey based non-governmental organizations located in Kreuzberg, as well as making a record of young participants’ own migration experiences, aiming at establishing a starting ground for possible joint productions.

With a background in architecture, artist and writer Pinar Ogrenci (1973, Van, Turkey) lives in Istanbul and Berlin. She is the founder of MARSistanbul, an art initiative launched in 2010. Her body of work, which consists mostly of video art and installations, is at the intersections of social and political content, everyday practices, and human stories. Carrying anthropological characteristics, her work focuses on collective movements -ranging between activism and religious rituals-, nationalism, assimilation, war, forced displacement, and urban policies. Yet, they vary independently of theme and geography. Her works have been exhibited widely at museums and art institutions including at 12th Gwangju Biennial (2018), 6th Athens Biennail (2018), Tensta Konsthall Stockholm (2018), Kunst Haus Wien- Hundertwasser Museum, 2017; Württembergischer Kunstverein (WKV) Stuttgart, 2017; the Istanbul off-site project for Sharjah Biennial13, 2017; MAXXI Museum, Rome, 2015-6; SALT Galata, Istanbul, 2015-6; De Las Fronteras Biennial, Tamaulipas, 2015 and Depo, Istanbul, 2014-8. Her first solo exhibition abroad was realized at Kunst Haus-Hundertwasser Museum in Vienna, “A Gentle Breeze Passed Over Us” in 2017.

The workshop takes place in the frame of Caring for Confict, an intersectional art and education project by District Berlin and Institute for Queer Theory, funded by Projektfonds Kulturelle Bildung.