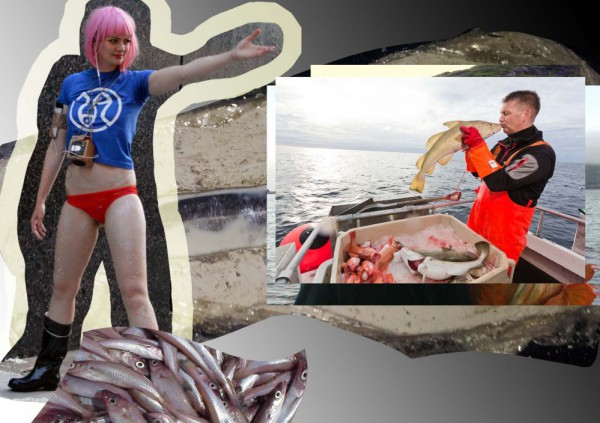 The workhshop is presented as part of KEEP FROZEN Projects  in Leipzig and Reykjavík:

in the frame of  SEA BODY INFRASTRUCTURE IMAGE.  An Artistic Research Symposium (22.–24.1.2016) at Kunstkraftwerk Leipzig

in the frame of RECLAIMING LANDSCAPE (11.–12. Februar 2016) at the Iceland Academy of Arts and Hverfisgalleri, Reykjavík.

Participation is free. The workshop is in English and accommodates 12 participants. Please register until 3 days before via sh@district-berlin.com.

Bryndís Björnsdóttir’s Quota Queen is a ‚performance of sorcery, referring to the vanishing of witchcraft, with the methodical subjection of women and appropriation of their labor, during the rise of capitalism […] The Quota Queen is presented as a subaltern of the Quota kingdom in Iceland, which has reigned over the natural resources of the island since the privatization of fish quota in the 1980’s.‘

Peter Linebaugh and Marcus Rediker’s ‚he Many-Headed Hydra. Sailors, Slaves, Commoners, and the Hidden History of the Revolutionary Atlantic ‚ is an attempt to rewrite the self-naturalizing history of capitalism from below, the two historians follow the trajectories of the ‚hidden‘ histories of subaltern groups creating and defending already existing alternative social worlds in opposition to the violent rise of capitalist imperialism from the 16th century onwards.

Emma Haugh’s continuing, roaming and mutating Reading Troupe operates as a series of performative workshops where the “readers” are invited to participate in an active embodiment of knowledge dissemination and production. This collaborative practice is an attempt to collectively enter the body of a chosen text through improvisation, imaginative dissonance and amateur dramatics rather than analytic and academic language. Emma draws on long years of experience as a facilitator in community and activist theatre making, including extensive work with Augusto Boals Theatre of the Oppressed. Each Reading Troupe is documented self reflexively by the group and edited into a web and print zine.

The Many-Headed Hydra is a hydropolitical performance and publication project developed by the artist Emma Haugh and the curator Suza Husse in collaboration with artists, curators and theoreticians from different islands and continents at District. Understanding bodies of water as political, historical topographies and planetary subjects in their own right, this transdisciplinary project proposes a translocal hydrography of fluid body imaginaries, diasporic experiences and alternative forms of existence in the age of the anthropocene and bio-colonial crisis.