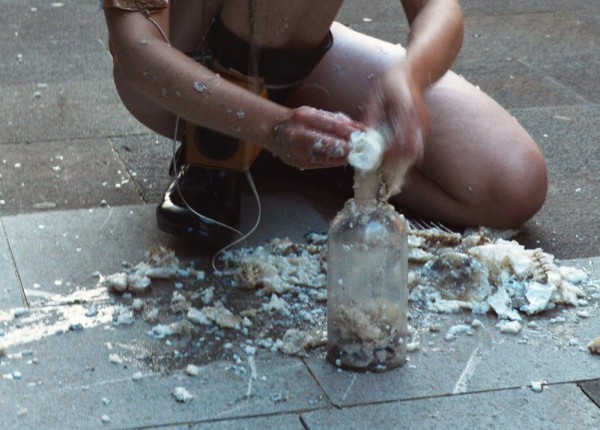 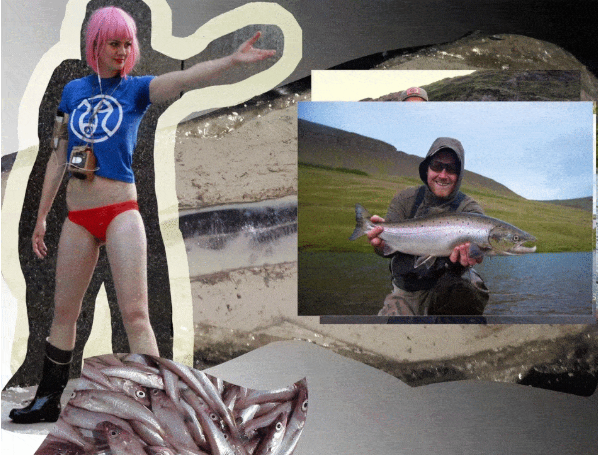 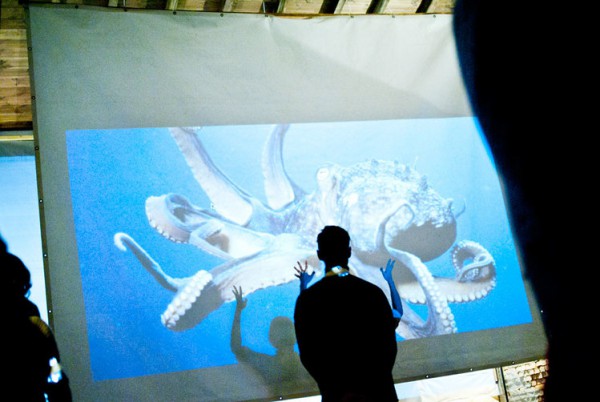 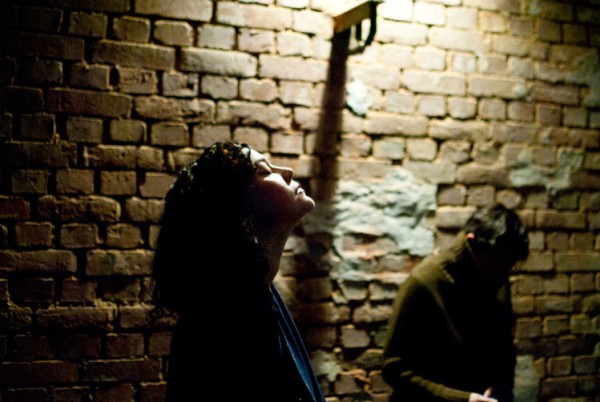 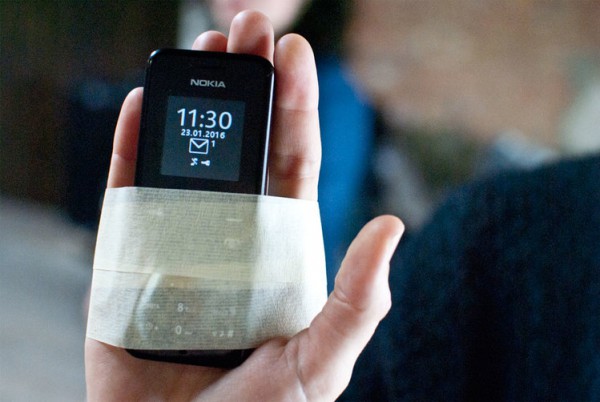 The symposium SEA BODY INFRASTRUCTURE IMAGE originates in the artistic research project Keep Frozen developed by the artist Hulda Rós Guðnadóttir in Icelandic, Moroccan and North American harbor cities since 2010. An ongoing investigation into coastal cultures, transnational labor relationships and the movement of bodies, machines and commodities, Keep Frozen materializes at the intersection of the global fishing industry and neoliberal urban development.

Gathering practitioners from artistic, curatorial and theoretical fields, a group of artworks and audience members, the three-day program of various figurations, including performances, conversations, a site visit, roundtables, video screenings and physical exercise, links current practices and discourses of arts-based research with thematic and topographic contexts of the project.

In a meeting with the Leipzig based editorial group of the magazine outside the box, the symposium takes a departure point in intersectional feminist perspectives on the politics of labor and forms of knowledge production in relation to social hierarchies and biopolitics. Drawing from critical theory and examples of artistic practice, Jonatan Habib Engqvist’s contribution will address ‘work’ as a potential form of fabricated agency and regard its physical symptoms to demystify the concept of ‘immaterial labor’. With Extended I Exercise – The Class (Dafna Maimon) queer approaches to the body and its performance in the production of images, identities, definitions of self and other are invited to gain understanding of contemporary body intimacies with technological, economic and corporeal infrastructures.

A territory of passage undergoing social and ecological transformations, the North Atlantic Ocean is discussed as a shifting geopolitical entity with members of the transdisciplinary research project Occupational Hazard. Its material and mythological meaning as infrastructure and resource resonates in the streams of technology and capital, the diasporic histories, the desires and discourses that cross its waters. Embodiments of the queer, eco-sexual, inter-species, spiritual and scientific that inhabit a different shoreline in Between the Waves (Tejal Shah) stimulate imaginaries of fluid forms of existence between archaic and futuristic realms.

Based on these topical fields and their crossings, the roundtables with Hulda Rós Guðnadóttir, Emma Haugh, Anne Hofmann, Suza Husse, Sören Kjörup, Dafna Maimon and Nine Eglantine Yamamoto-Masson provide a framework to reflect arts-based research in terms of methodologies and narratives, economies and environments, power structures and affects.

The group of artworks participating in these translational set-ups are invited to be interlocutors in their own right: They introduce scenes of transition in the scope of the symposium, such as the moments of the fish unfreezing from its immobilized and packaged state in the transactions and journeys of Labor Move. Together with these examples of artistic research, the participants in the Hydra Reading Troupe Workshop #01 SPEAKING AS FISHES (Emma Haugh & Suza Husse) which concludes the symposium, will “animate” the fish as a presence of (neo)colonial currency traversing oceans, bodies and forms of knowledge as well as a fluid site for reimagining interdependencies and interspecies relationships.

SEA BODY INFRASTRUCTURE IMAGE. An Artistic Research Symposium is a project curated by Suza Husse and Hulda Ros Gudnadottir in the frame of Keep Frozen Projects at Kunstkraftwerk Leipzig in collaboration with District. The symposium is funded by the Nordic Culture Fund, the Nordic Culture Point, the Finland Institute in Germany, and the Swedish Embassy.

The participation in the symposium is free, please register via
http://www.kunstkraftwerk-leipzig.com/en/upcoming-exhibitions/

At the feminist library MONALiesA, founded in Leipzig in 1990, we will join the publishers of outside the box – feminist magazine for social critique – in one of their Fridays work meetings. To discuss current politics of labor and knowledge, the gathering will evolve along the fourth issue of outside the box, which was published in 2013: ARBEIT (work/ labor) emerged from the “awake desire to criticize what makes us tired” and collects different voices of intersectional emancipatory critique on the topic of labor and female subjectivity, for example in the context of (post-)socialism, of migrant labor and of social imagination beyond labor.

Keep Frozen is an art-practice-as-research project exploring harbor aesthetics, the conditions of manual dock labor and the artist’s practice as research. The 3-channel video installation Labor Move is the second part of Guðnadóttir’s exhibition at Kunstkraftwerk and centers on the movements of a group of dock workers performing their work on 8 and 9 January 2016. Working shifts from 6 am to 7 pm, at the Reykjavik harbor the dock workers within 48 hours move up to 25.000 boxes of frozen fish from freezer factory trawlers. During the performance and accompanied by a film crew they reenact these movements in a ritualistic dance within the 500m2 post-industrial exhibition space. The resulting video installation materializes this re-staging of work and re-contextualizing of subjects.

Extended I Exercise – The Class activates reflection on image production, subjectivity, corporeal extensions and technology intimacies in the digital age. The hybrid performance project is concerned with identity constructions that challenge definitions of the self, the other and the body while creating a space of imaginary experience for our living or technological doppelgangers and missing limbs. The audience can join or observe the latest development of the project in which the movement technique “Extended I Exercise” will be introduced.

The proposal is to talk about dematerialization and juxtapose it to the notion of “quasi-work”. Along examples of artistic research practices and other references we will attempt to demystify immaterial labor through both physical symptoms and the idea of economics as politics of distance and intimacy (Valur Antonsson). We will address about the ambivalence of work as a form of social and fabricated agency, acknowledging the inherent paradoxes. As curator and art historian Lars Bang Larsen has claimed “we are damned if we define art as work, and damned if we don´t. Art considered as work, and art considered as non-work are two equally relevant and yet incommensurable arguments.”

14.30 – 15.15 h Figuration VI: Occupational Hazard – on notions of ‘ecology’, ‘active citizenship’ and ‘the future’ in relation to shifting geopolitical conditions and emerging new waters of the Arctic
A conversation in progress with the OH-project

The Occupational Hazard (OH) project is a transdisciplinary research project by artists, scholars and scientists developed at a former Nato-base on the Reykjanes peninsula, Iceland. While the site is being redeveloped, ‘Artifacts’ of the Cold War remain as reminders of the past and current challenges. As the ice cap melts and the ‘Warm War’ unfolds, the North Atlantic once again faces complications and new opportunities for its resources and emerging shipping routes. New North Atlantic identities, narratives and politics are being developed with heightened interactions. The transitional space provides a “laboratory” for a translocal, transhistorical dialogue, critical strategies, and technology focused on social and ecological transformation in the North. As a platform for raising larger questions that address our troubled grounds of being, the OH-project emerges from our need to redefine facts and values.

Fistfuls of Water: The first roundtable discusses the inherent resistance of artistic research to being fully captured by any fixed definition. Stimulated by contributions by Emma Haugh, Sören Kjörup and Nine Eglantine Yamamoto-Masson we will address the importance of unlearning for critical knowledge production, and the necessity of artistic research to at times position itself outside of traditional scholarship, and to question institutional conventions of “legitimising” certain forms of knowledge.
Between the Waves is an excerpt from the 5 channel video installation by Tejal Shah from 2012 and will bridge our conversation from the first to the second roundtable. In Between the Waves Shah creates sensual, poetic, heterotopic landscapes within which she places subjects that inhabit personal/political metaphors – embodiments of the queer, eco-sexual, inter-special, technological, spiritual and scientific. Their activities feel archaic and futuristic at the same time, primitive but filled with urgency and agency. Multiple historic and mythological references are layered, woven and problematized.
We sweat and cry salt water, so we know that the ocean is really in our blood. (Teresia Teaiwa): The second roundtable invites an exchange on how to swim the streams of discourses, imaginaries, histories, desires, technologies and economies and how to sound the waters that traverse and suffuse our bodies. Based on the impulses by Hulda Rós Guðnadóttir, Anne Hofmann and Dafna Maimon the discussion will examine methodologies of arts-based research as well as practical and epistemological challenges.

11-16 h Figuration VIII: Hydra Reading Troupe Workshop #01 SPEAKING AS FISHES: A collaged reading of The Many Headed Hydrathrough the body sorcery of Quota Queen
Workshop by Emma Haugh and Suza Husse
The workshop is held in English and accommodates 12 participants. Participation is free. Please register until Thursday 21 January, 2016 via sh@district-berlin.com.