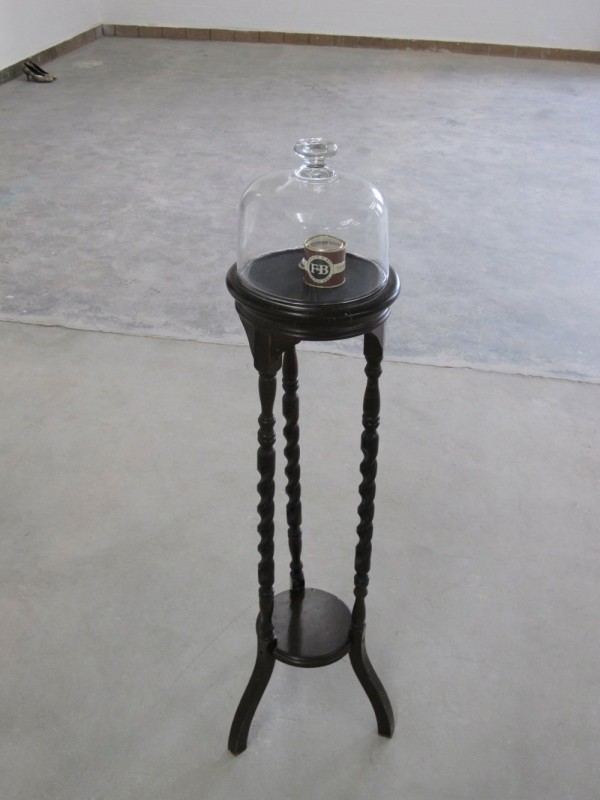 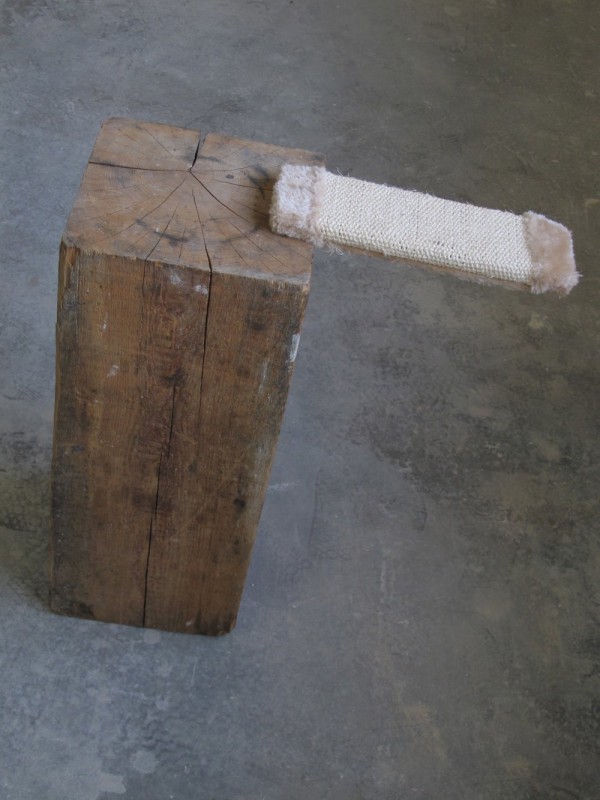 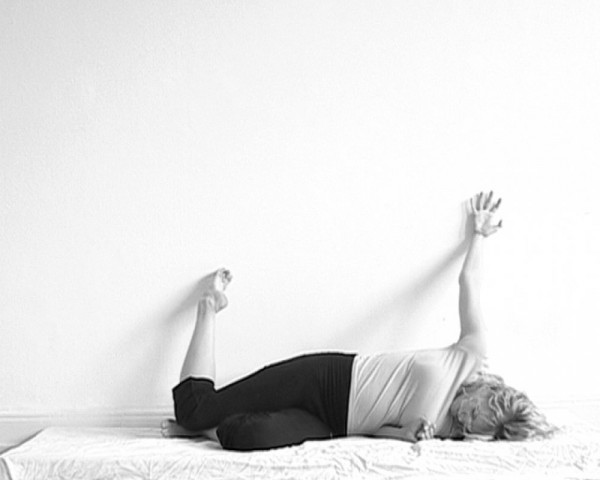 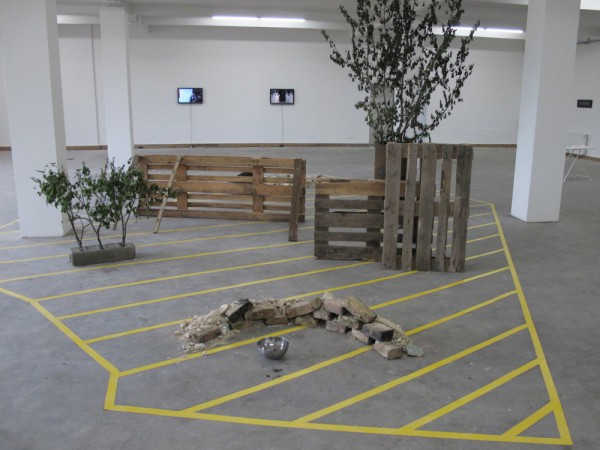 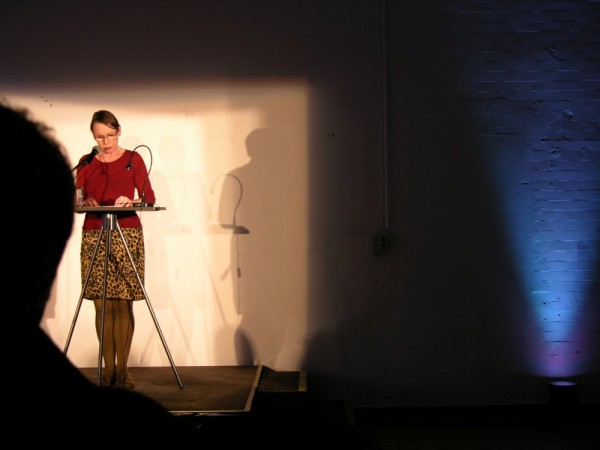 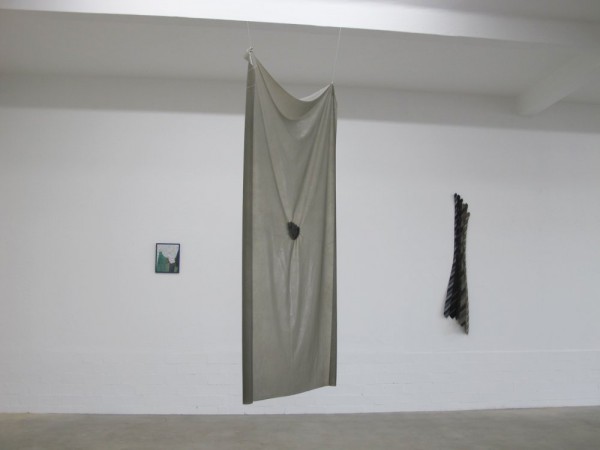 Katrin Connan, Everybody tells the truth, 2011

The exhibition In the Folds of the Curtain is concerned with the materiality of objects and the self-engagement of the subject with material experiences. Inspired by Walter Benjamin’s early childhood memories of his sleeping space, darkened by a curtain, and the ‚Mummerehlen’ (Berlin Childhood around 1900) as well as Wassily Kandinsky’s poem Der Blick (The View) from the book Klänge (Sounds) from 1912, six artists work with the affective language of things and productive misunderstandings. This exhibition focuses on the vital, non-communicable and magical aspect of the language of things. Many of the works shown are artistic experiments that attempt to recognize a human-oriented meaning in the objects of our surroundings, and to cause these things to speak for themselves. Aren’t the changes in scale between microscopic and macroscopic, between subjectivity and objectivity, a prerequisite for encounters between spaces, contexts, artists, art and viewers?

“Objects that are united with the subject due to a shared entanglement tend to be regarded as events rather than as objects – more events of becoming than of being: waves.” Mieke Bal: Hovering between thing and event: Encounters with Lili Dujourie. Munich 1998. p. 38

On the occasion of the exhibition In the Folds of the Curtain, Katharina von Dolffs and Gerrit Frohne-Brinkmann have realized the installation Hauptschlacht (Main Battle) (2011), which focuses on the playful duel. The zone marked with yellow stripes, the wooden pallets, a bush, a ton and a withered tree recall an impromptu backyard playground of barricades. The opposed walls of stone and gravel serve to visualize two sides. The stscipline, in which the visitors combat against each other is: Spitting cherry pits over obstacles. The sweet red morello cherries, flying across the room like Kandinsky-esque spots receive a tactical-operative level due to Katharina von Dolff’s handwritten Directory of Tactical Signs and International Symbols (2011). This installation declares artistic practice to be a place of warfare, altercation over power, positions and spaces of aesthetic experience.

Daiga Grantina shows her new video pieces  She Was (2011) and Gare du Nord (2011) for the first time. These were produced during a residency in Paris in Spring 2011. For her video piece She was she recorded a sequence from the international channel ‚Fashion TV’. On the monitor, long legs, bright fabric, steps on the catwalk and captivated onlookers hover. The (in)visible model and her face, look, birthplace, and brand of clothing remain to be guessed at – all the information has been absorbed. The material, filmed off of TV, robs the media of its credibility, the digital colours and grainy, silent images leave the reconstruction of the main act to the spectator. In Gare du Nord, her second video piece, a static camera captures the lively activity of the Parisian train station from a frog’s eye view. Within seconds, our perception shapes the station’s bright architecture, the suitcases, shoes and pants legs of the travellers into abstract mobile colour planes.

Die Synästhetin (The Synesthesist) (2011) by Gerrit Frohne-Brinkmann analyzes the spacial situation with its head first. It can perceive colours, shapes, temperatures, music and smells simultaneously. Inspired by a figurehead on the bowsprit of a ship, this sculpture, which is equipped with a rotary motor and small wiggly eyes, is a humorous tribute to Kandinsky’s affinity to synaesthesia. The constant rotation and the yellowish-green colour of the sculpture recall acute seasickness, a metaphorical image, through which a contemporary artist expresses his relationship with Kandinsky’s theories.

In the atrium of the institution, Annika Kahrs shows her video piece Études cliniques ou Artistiques (2007), in which a young woman mimics typical poses of Fin de siècle women suffering from hysteria. The hysteria specialist and contemporary of Kandinsky Jean-Martin Charcot (1825-1893) took numerous pictures of ill women with his co-workers at the Hôpital de la Salpêtrière, photographs with an exposure time of up to twenty minutes. In her video, Annika Kahrs focuses less on revealing the constructed aspect of this disease, and more on the study of the body as a medium. In the video, extras such as props, masks, facial expressions and sounds are waived, instead the protagonist is highly concentrated in re-enacting the historic poses individually. The installation Zeit, Simon, Teleskop (2011) by Annika Kahrs revolves around wishes and their hallucinatory origins in childhood. The three horned porcelain masks are moulds of the artist’s face at the age of 9 years, they lie on an ironing board, ready to be used. Zeit, Simon, Teleskop points out how the child’s wishes have altered through adolescence and modernity. While ‚Time’ counts as a privilege of the mature person, ‚Simon’ represents a young girl`s teenage crush. The ‚Telescope’ as a sober stargazing device contrasts with the horns, which symbolize the ecstatic cult in shamanism.

I`ve Lived Too Long and I’ve Lived Too Well (2011) by Burk Koller revolves around the myth and the true events relating to the luxury pain colour Elephant’s Breath by Farrow & Ball. A small can of high-class wall paint is set on a historical plinth, protected by a bell jar. This colour was developed at the beginning of the 20th century when the famous British interior designer Nancy Lancaster (1897-1994) heard that people, who suffer from headaches, believe in the healing powers of elephant breath. This ludicrous story and the tiny tin of paint raise the question whether this product is the result of a calculated illusion that continues to this day.

Katrin Connan focuses on the instance of the joyful transformation of surfaces and objects. In Die Leichtfertigen (The Frivolous) (2011) shoes decorated with bright decorative appliques hint at a night of dancing, in which the next day doesn’t matter. In René-Claude René-Claude (2010) a pleated skirt made out of neckties hangs on a wall, a unisex fashion item. The curtain Everybody Tells the Truth (2011) is based on an engagement with mise-en-scene, styling, and jewellery. The humble latex material, the cheap beads sewn onto it and the unglamorous format of the curtain does not prevent it from shining and shimmering temptingly from afar. In Kill Dead Corners (2011) Katrin Connan tries in vain to capture all corners of the room with wind, as the folds of the room are mirrored in the rotating silver cardboard. As the exhibition space is mostly windless, the visitors are invited to move to the board themselves.

With Untitled (Ricarda) (2011), Gerrit Frohne-Brinkmann has created a site-specific installation out of three elements: a scratch-resistant springboard mounted on a log and two tables, each with a cat tree sculpture. These cat playgrounds are materialized projections of human needs on the animal. The artist uses them as a point of departure for his reflection on sculptural form-finding and material. The two designer boat tables, which Frohne-Brinkmann found in the winery are stylistically just as pretentious and useless objects, as the cat trees in Untitled (Ricarda) (2011). The plinths, colours and materials are the expression of habitual practices, accompanied by a morbid feel due to the very absence of the pampered cat. Gerrit Frohne-Brinkmann is also interested in the power of coincidence. In his five-part conceptual photo series Spunk (2011) he used a sheet to masquerade as a ghost. Given that the chemicals of the fifteen-year-old Polaroid film are dissolving, his pictures have white spots and a yellowish veil, recalling occult photographs of the early 20th century.

The exhibition was curated by Ulrike Gerhardt and took place at Haus Sassendorf in Bad Sassendorf and at District. Special thank goes to the actress Sigrun Schneggenburger, Susanne Modelsee and the dramaturg Albert von Dolffs.