14.12. Open Letter by KUNSTBLOCK AND BEYOND for the protection of the non-commercial youth centres Potse and Drugstore 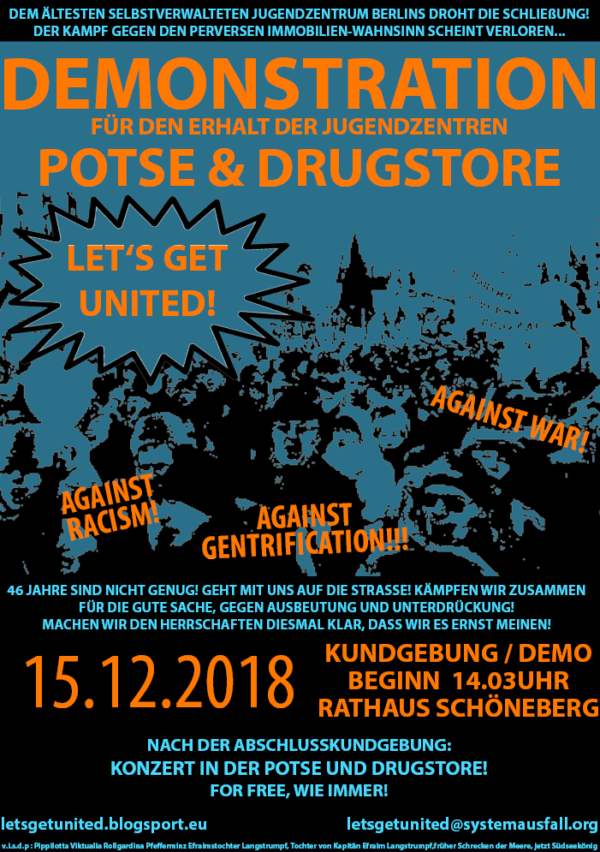 We, District Berlin, stand up for the two non-commercial youth centres Potse and Drugstore in Schöneberg. Tomorrow’s generations, too, need spaces where access is not defined by how much you can pay.

Open Letter by KUNSTBLOCK AND BEYOND:

On the 31/12/2018, the two oldest self-organised youth centres in Berlin are being evicted from their spaces, which are to be modified into profitable ‘co-working’ and ‘co-living’ sites by the company rent24: www.rent24.com. This business presents its offer as an inspiring community: “Community – Discover a new way to work together. Nothing is impossible for our members. No idea is too absurd. Whether it’s about knowledge exchange or just sharing a high five after a successful pitch – rent24 is your place.”

This new so-called ‘community’ of ‘knowledge exchange’ plans to cynically evict two youth centres that were established on the back of a campaign against the institutional care of orphans and so-called ‘misfts’, run by the Extra-Parliamentary Opposition ‘Außerparlamentarische Opposition’ (see here (EN) and here (DE)).

Since then, the two youth centres have served as an emancipatory measure against authoritarian concepts of social work for young people, offering a non-commercial place for the exchange of experiences and understanding.

Currently the building complex in question – which is already partially in use by rent24 – is rented out by a letterbox company which, according to European anti-corruption agency OLAF, can be traced back to a business registered in Cyprus.
The local city council, which monetarily supports Potse / Drugstore, no longer intends to pay the rent demanded by this private company. However, the local city council has also not yet signed a contract for a new possible location. It is therefore unclear whether, and under which conditions, the youth centres will be able to continue to exist.

Just at the beginning of December 2018, the event ‘Wiedersehen in TUNIX!’ at HAU Hebbel am Ufer reminded us of the legendary Tunix Congress, which took place in January 1978 at Berlin’s Technische Universität. The Congress stands as a milestone in Berlin’s culture of political projects, inspiring countless collectives and calling into being not only the daily newspaper the taz, but also many other self-organised structures, including housing co-ops, bookshops, urban initiatives and independent political centres.
Drugstore’s cultural programme was a part of the Congress. Alternative centres such as Potse and Drugstore cannot simply be whitewashed out of the history of Berlin’s local and cultural landscape! While at HAU, the Tunix Congress and its impact on Berlin’s independent cultural and political scene is retrospectively revisited and analysed, Drugstore and Potse – after almost 50 years – are currently to give way to a profit-oriented “rent24 community”.

As artists and cultural workers, Kunstblock and beyond supports the non-commercial youth centres and demands that Potse and Drugstore be kept! Berlin is getting increasingly expensive and in the process, living and working spaces, as well as non- commercial spaces, are becoming scarce.

Kunstblock and beyond says NO to selling off the city, NO to Google and Pandion in Kreuzberg, and NO to rent24 in Schöneberg. Tomorrow’s generations, too, need spaces where access is not defined by how much you can pay.

As Kunstblock and beyond we ask you, too, to stand up for the two youth centres.
This is how you can provide support:
– with a public statement in social networks or on your website
– come to the demo on 15/12/2018, from 14:04 at Rathaus Schöneberg, and share the call-out.

Kind Regards,
Kim Sonntag in the name of Kunstblock and beyond