On Tips of Tongues, and Feeling as Taste 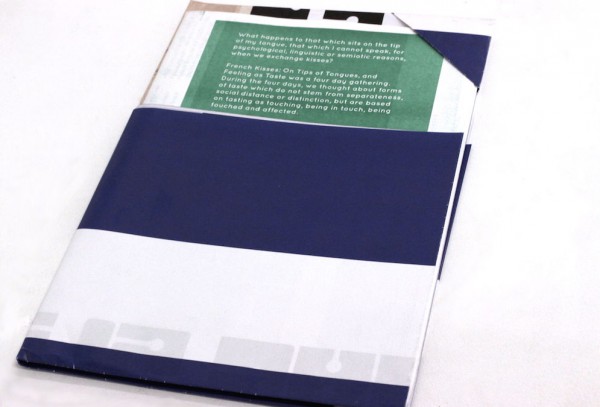 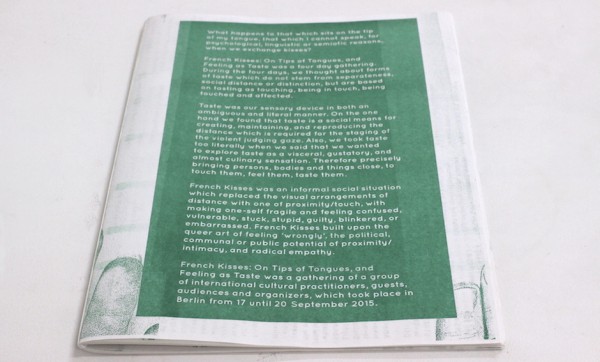 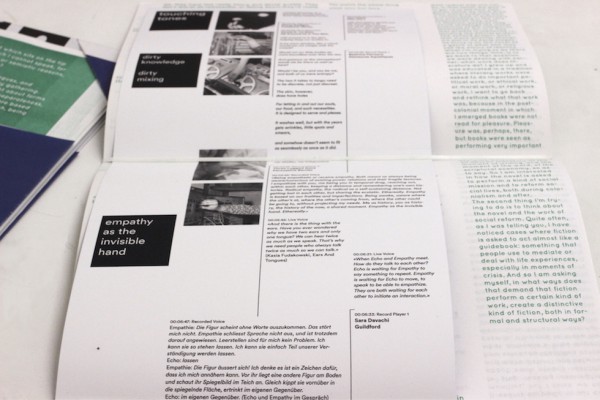 What happens to that which sits on the tip of my tongue, that which I cannot speak, for psychological, linguistic or semiotic reasons, when we exchange kisses?
The publication French Kisses: On Tips of Tongues, and Feeling as Taste is loosely based, in conversation with and building on a 4 day informal and intimate gathering. During those days, we thought about forms of taste which do not stem from separateness, social distance or distinction, but are based on tasting as touching, being in touch, being touched and affected.
French Kisses: On Tips of Tongues, and Feeling as Taste was a gathering of a group of international cultural practitioners, guests, audiences and organizers, which took place from 17 until 20 September 2015 at District, at Berlin Community Radio, and in homes and at places across the city.

The publication is a re-mix of contributions by the participants Hannah Black, Olive Michel &Fred Hystère/Anna Frei, Girls Like Us, Max Göran, Annette Knol, Andreea Pavel/D.R.E.E.A, Lorenzo Sandoval, and Felicia von Zweigbergk as well as contributions by guests, audiences and organizers.

Compiled by Maria Guggenbichler and Amal Alhaag / Side Room, Amsterdam

The zine is a result of a project with the same title that was developed at District in fall 2015 in the frame of our series Curatorial Practices: Fields and Techniques. It responds to our call for curatorial gestures themed Queering TASTE: The art of losing is not hard to master / though it may look like a disaster and were selected by a jury composed of Maria Thereza Alves, Suza Husse, Bettina Knaup, Nanna Lüth, Michaela Richter and Heiko Pfreundt.

Kindly funded by the Mondriaan Fund, the Swiss Art Council Pro Helvetia, and the Amsterdam Fund for the Arts