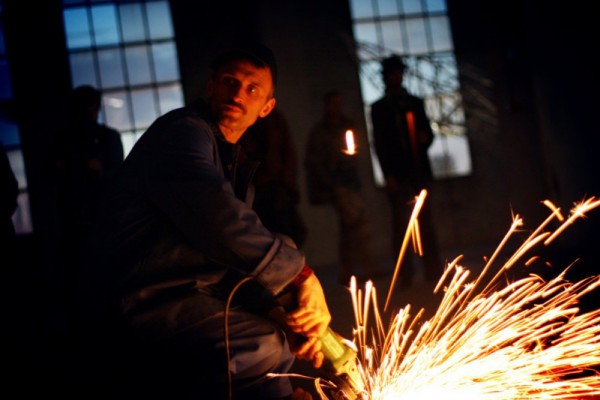 The studio talks are a public frame for studio grant artists at District to discuss their practice departing from a selection of work samples. To broaden the perspective on their own work as well as the turns in the open conversation with interested guests, District invites each studio grant artist to engage an interlocutor from a foreign field of knowledge.

In her projects Zorka Wollny (*1980), who is working in the District studio from January to July 2014, actuates vocabularies and tactics of different artistic disciplines and societal movements. In collaborative resonance to specific architectural and socio-political situations the Krakau born artist drafts choreographies and compositions, which are as immediate as they are complex. She traces cultural narratives and hidden micro-historical codes in the spaces she activates and transforms them into notations for subjective gestures and joint re-imaginations.

For her studio talk she has invited the cultural theorist Sabine Sanio, who heads the department of Theory and History of Auditive Culture at the Sound Studies MA Programme at the Berlin University of Arts. With an eye toward the composition she is currently developing with students and graduates of Sound Studies for the defunct industrial heart of Malzfabrik, the night will be dedicated not only to forms of trespassing in the inbetween of visual arts, performance, contemporary music and sound.

Zorka Wollny earned her PhD in fine arts at the Kraków Academy of Fine Arts and is a visiting lecturer at Szczecin Art Academy. Her works were shown at the most prestigious institutions of contemporary art in Poland, such as the Zachęta National Gallery of Art in Warsaw (2013), the Museum of Art in Łódź (2012), the Wyspa Institute of Art in Gdansk (2011) and Warsaw’s Centre for Contemporary Art Ujadowski Castle (2008). Moreover, she participated in international exhibitions at Akademie der Künste in Berlin (2013), at the Galerie für Zeitgenössische Kunst, Leipzig (2012), at Turner Contemporary, Margate (2011), at the Belgrade Museum of Contemporary Art (2011) and at Outpost Gallery in Norway (2010). She was a nominee at the Deutsche Bank Award for the best Polish emerging artist in 2009; in 2010, art magazine Arteon elected her Artist of the Year.