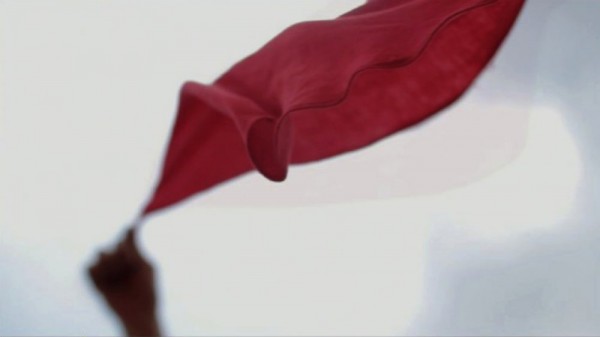 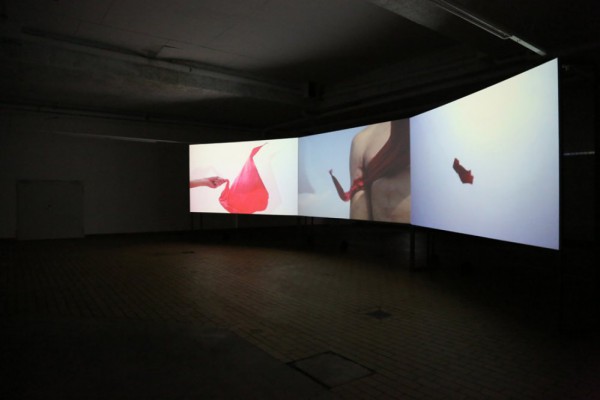 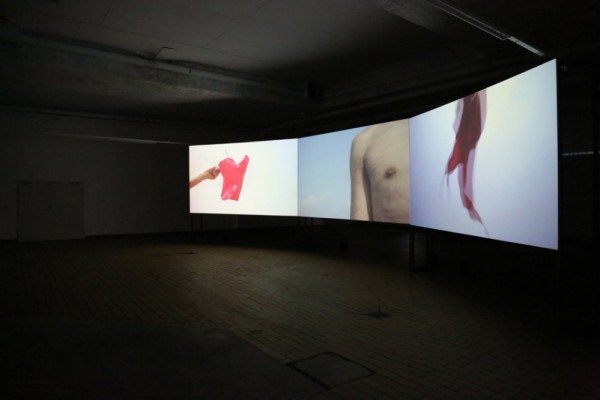 Tran Luong (*1960, Hanoi) is a conceptual artist from Vietnam whose works have gathered international resonance since the late 80s. The video installation Lập Lòeof the year 2012 shown at District will be introduced in the context of the symposium ổn định động Mobile Akademie  Hà Nội  Hội An  Sài Gòn  Bá Linh. Lập Lòe is based on a series of Tran Luong’s performances with the title welts.

Tran Luong is considered to be one of contemporary art’s pioneers of the so called post-Đổi-Moi [1] in Vietnam which developed in small affiliations and artistic communities in a conscious opposition to the production techniques, aesthetics and subjects of the highly regimented art scene of socialist Vietnam. As member of the artist group Gang of Five (1983-1996) Tran Luong worked initially mainly in semi-abstract painting as a medium which allowed him to explore methods of analytic imaging and to artistically process his present as much as the wars [2] he grew up under. In the 1990s he was among the many artists of the post-Đổi-Mới movements who increasingly experimented with performance. Performance art’s elusiveness and site specificity provided new freedoms for the embodiment of critical themes, the sourcing of alternative production and perception contexts and a way of resisting governmental censorship.

Under the signs of omnipresent control and repression, the anticipation of possible consequences is even today inscribed in the realization of performances. At the fringes of urban public life, which is influenced by red-yellow propaganda, growing commercial communication and ever-present guards of the regime, local and thematic site-specific gestures have emerged and still are. The Singaporean curator June Yap describes that the unconventional and discursive strategies of performance art are also “infecting” other forms of contemporary art in Vietnam and performativity has become a practice which not only deliberates art from its infrastructural limits in (semi-)public spaces, but also challenges official mechanisms of control[3].

In Lập Lòe Tran Luong actualizes subjective memories and frictions of the present, which were triggered in 2007 at the sight of the pioneer’s scarf- a mandatory for the communist youth- around his son’s neck. In the same year, the first performance was developed in which the artist sets the red scarf with its deep historical and political symbolics in direct and painful relation to his own body. Lập Lòe is the re-enactment of a playful fight which he used to practice with his classmates during his childhood. A childish imitation of traditional East Asian silk kung-fu, the goal is to twist the scarf out from your hand so that it becomes a whip threatening the opponent. While during the game every player has a scarf and the skill is also based on the ability to avoid hits, during the performance the artist’s naked skin becomes the sole target.

After the first performance in 798 Art Zone, a former weapons factory in Bejing (DaDao Life Art Festival, 2007), Tran Luong realized this performance at fourteen locations in Vietnam, Korea, Indonesia, Singapore and Norway in the past years. Almost every time he asked the audience to take the scarf and to awaken their own memories, to perform buried knowledge and to share their ghosts with him. In fact this simple game has been and still is not only prevalent among socialist pioneers who carry a toy and a weapon in the form of this red scarf on their bodies. This kind of game are part of the intercultural repertoire of a physical showdown, of a cultural practice to redefine objects and of learning techniques to stand and avoid physical pain. Much like in his earlier performances, videos, paintings and curatorial projects, Tran Luong embodies and questions in Lập Lòethe inner an outer scars of ideological indoctrination and deprivation suffered over generations. As an artist in a society that rarely dares to look back into its past as a country of chinese occupation, French colonisation, American War, division and destruction through wars as much as political arbitrariness, his artistic testimony also speaks of the necessity to look for traces in our own bodies and histories.

Lập Lòe was developed in 2012 as a three channel video installation, in which the red scarf is choreographed by seemingly invisible forces. In the left image it’s flying through the air like pennants wagged by pioneers at official occasions. The sound of flutter and flapping in the wind coming from the speakers on the left side evokes the image of flags wafting or the wingstrike of white doves, a communist peace symbol, which were freed from their cages during official events (for example in the GDR). In the centre of the video installation the fluttering piece of cloth transforms yet again into a whip- the red textile attacks rhythmically and strongly against a body covered more and more in welts. The flicking and hitting of the cloth onto the body can be heard in the second soundtrack in the middle. In the right image the famous and ambiguous piece of clothing falls from the sky in a more and more rapid tempo. The underscore is the signal of the siren which resounded from the rooftop of the Hanoi opera house to warn against bombs during the war.

The body, marked by signs of torture is spinning without end, as if to expose its surface to the beatings. This tortured Torso appears to be an image of a social body in conflict with itself. His scars equal the experiences of generations of critical thinkers, artists and activists who live up until today under repression of the regime or constant self imposed censorship. For the artist, interaction with the scarf is not only a source of pain, but denotes a necessary state of transformation and a catalyst process of understanding [4].

In an explanation accompanying the installation, Tran Luong writes:

Whether, fireflies, fires of war or lightning before the storm- the existential experience of uncertainty over the consequence and cause of events is something that people who have lived through the cold war (not only on the socialist side) share. Just like the waiting for an imminent, necessary change.

[1] Since 1986 the CPV (Communist Party of Vietnam) rules the country with a political office of 15 members based on the model of a market-based tolerant socialism. Đổi Mới, which means renewal, denotes Vietnam’s era of party ruled, market-based liberalization.

[2] After he experienced the American bombardments in the course of the Vietnam war (called American War in Vietnam) during his childhood days, the fights against the Khmer Rouge began during his youth and in 1979 China attacked North Vietnam.