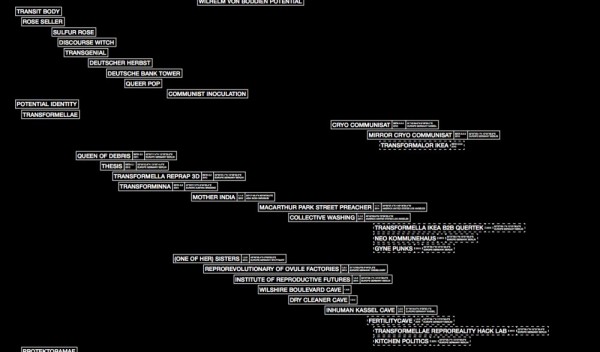 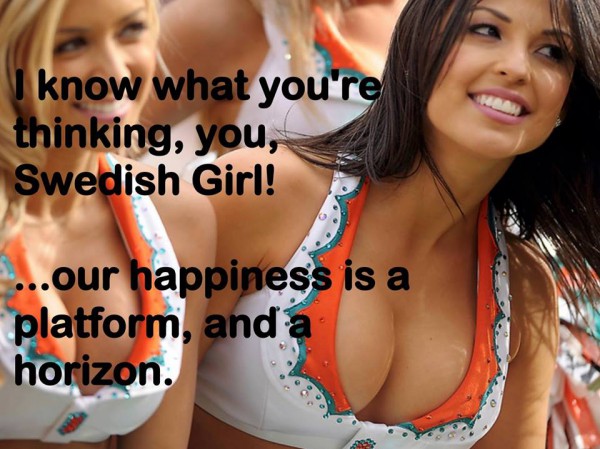 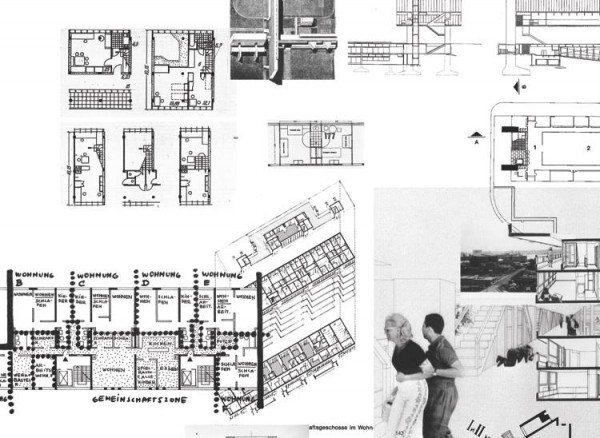 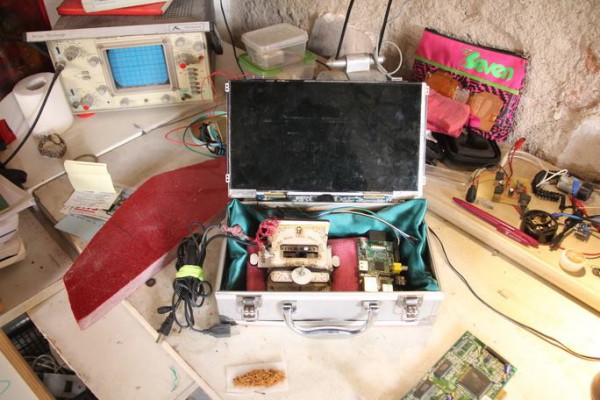 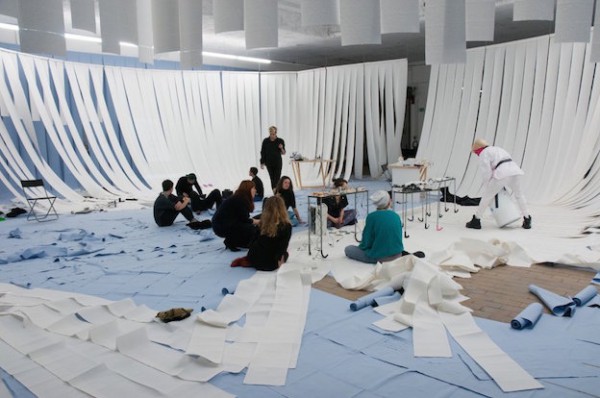 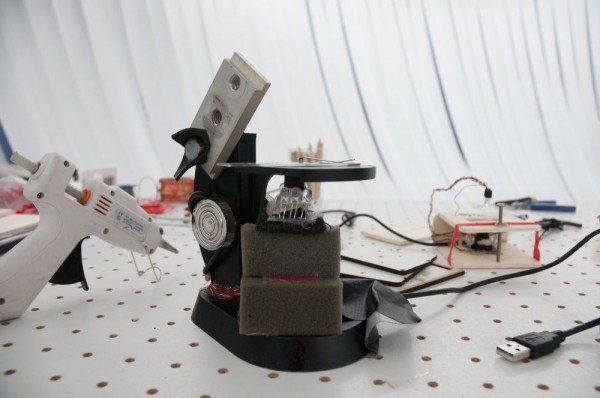 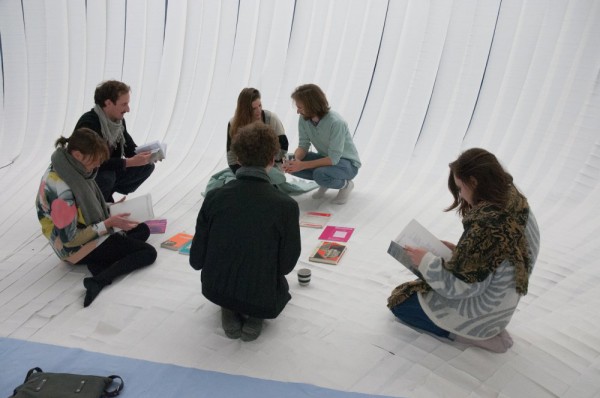 Workshops and gatherings hosted by Transformella ikeae at the FertilityCave 1.0.6

The ReproReality Hack Lab is a series of workshops initiated by the research avatara Transformella and the curator Suza Husse to collectively fathom queer-futurist reproduction scenarios. In the gatherings with the Science Fiction writer Ashkan Sepahvand, the architects / city activists Robert Burghardt and Anna Heilgemeier, the publishers collective Kitchen Politics and the transhackfeminists Gynepunks, Transformella and the participants will work on modes of a potential ReproReality. In the process of constructing the Bio-Techno Tribe, which Transformella calls for, the ReproReality Hack Lab gives occasion to interlace feminist techno utopias, bio-hacking and androgynous life forms as well as neo-communal architectures and queer Science Fiction.

WE ARE IN A MEETING

The meeting aims to integrate expert knowledge on Reproductive Futures into the Agenda on Living Environments, a 5-year corporate strategy developed by Quertek to expand its Übermaterial® Supplements and Services into the emerging market of Living Strategy Design. The fictional format of a “business consultation” will be used to explore the creative logic of capitalist realism and how performative speculation can hack the future. Based on a re-reading of Shulamith Firestone’s 1970 text The Two Modes of Cultural History, where she argues for an “Anticultural Revolution” in the future, the consultation will reflect on practices that accelerate trans-formation.

How can we reformulate the spatial contexts of social (reproduction) relationships? Looking at the layout of historic communes – like the constructivists’ commune houses, the forms of communal sustenance or the communes that emerged in the 1968 movements – and todays models of shared living, the planning workshop initiates collective projections toward a queerfuturist commune architecture for the Transformellae-tribe. As a material principle which facilitates and undergrids modes of relating, the architectural ground plan will be taken as a starting point for the shared hacking of architectures, city areas, islands or territories.

Reproduction Technology, Reproductive Labor, and Family in the 21st Century
A dialogical workshop in two parts

In conversation with Transformella ikeae the collective invites the participants on a journey through the history and presence of techno-utopias. Feminist visions of life forms and reproduction technologies from texts by Shulamith Firestone, Marge Piercy and Donna Haraway set the point of departure. The second part of the workshop is dedicated to a discussion of biotechnologies in the context of neoliberalism based on the theses formulated by Kitchen Politics in their current book Sie nennen es Leben, Wir nennen es Arbeit. Biotechnologie, Reproduktion und Familie im 21. Jahrhundert (‚They Call It Life. We Call It Labor. Biotechnoloy, Reproduction And Family in the 21st Century,’ Melinda Cooper, Catherine Waldby, Felicita Reuschling, Susanne Schultz, 2015).

The collective Gynepunks works on the development of DIY-DIT equipment based on open technologies for body analytical experiments and radical forms of transdisciplinary collaboration. In the Open Lab, the participants will build DIY microscopes and 3D speculums to probe the bio hacking applications developed by the Gynepunks for the queer-futurist appropriation of reproduction technology. Based on their transhackfeminist practices and theories, the workshop opens a space for speculation at the crossings of biointerfaces, cybernetics, queer science, post-human discourses and techno-spiritual rituals.

Please register for the ReproReality Hack Lab gatherings and workshops until two days before via post@district-berlin.com. For the Open Lab Gynepunk V.04 a fee of 15 EURO is required to cover the costs of materials for the construction of the DIY microscopes which will remain in the hands of the participants after the workshop.

Robert Burghardt is an architect and his work includes practical construction planning as well as conceptual models, e.g. his design of a monument to Modernism, or his teachings and theoretical discussions of architecture’s political potential.

Anna Heilgemeir is an architect and co-founder of L.A.Müller (L.A.M.), an interventionist collective of women artists. Collaborating with clemens krug architekten, Hummel Architekten and Mietshäuser Syndikat, she develops and realizes concrete projects for communal living and models of ownership. Since 2013, she has been teaching at the Chair for Urban Design and Urbanization at TU-Berlin.

Within the alliance Stadt von Unten (City from Below), both of them are working on a communal and user-initiated development in the so-called ‘Dragonerareal’ in Berlin Kreuzberg and are part of a network of architects devoted to developing real estate and properties modelled on the ideas of the Mietshäuser Syndikat. She has been working on a shared practice with BARBARA since 2014.

Paula Pin is a transhackfeminist performer and interdisciplinarity researcher. Graduated in Fine Arts from Barcelona and Sao Paolo, her work ranges from abstract video to circuit bending to investigations at the frontiers of biology, cybernetics and queer science. Questioning and blurring the boundary between science fiction and fact, much of her work investigates a broad range of subject matter relating to natural phenomena such as bioelectricity, bioluminescence, geochemistry and the cosmos.

Felicita Reuschling lives and works in Berlin. She conceptualizes themed exhibitions, film series and events, does research and writing on the issues emerging during this (often collaborative) process. Most of the times, the tension between feminism and Marxism serves as her theoretical background. (Beyond Reproduction – Mothering, Kunstraum Kreuzberg 2011; domestic utopia, nGbK 2013, counterplanning from the kitchen, moviemento 2013; feminist stories, vierte welt 2015)

She is part of the editorial collective Kitchen Politics – Queer-Feminist Interventions. In their concise publications, Kitchen Politics offer scope for political discussions and analysis which until now have been connected to the concept of reproductive work in different ways, as recently in Sie nennen es Leben, wir nennen es Arbeit (They Call it Life, We Call it Work) featuring texts by Melinda Cooper and Catherine Waldby.

Ashkan Sepahvand is a writer and researcher in Contemporary Celebration Studies. Intensities are crucial to his practice. Having spent many years culling non-knowledge and squandering orgasmic force from his experiences within today’s various leisure platforms, he has come to an embodied understanding that the future of this planet under technocapitalism involves a complete and final putting-to-work of our sensual capacities. How can we (re)learn to feel? Questioning the ways in which pleasure, leisure, joy, and sensuality can be critically problematized while also creatively worked with through theory-fiction and speculative design, his ongoing sci-fi research project “Mountgrove #” aims to narrate the possibilities and pitfalls for becoming-human through a micropolitics of ecstasy.

Transformellae ikeae – Constructing The Bio-Techno ReproTribe is a project of District, made possible through the friendly support of the Berlin Senat, Department of Cultural Affairs. Thanks to the partners Malzfabrik, Nordvlies, u-ton, Meder CommTech and media partners Jungle World and Missy Magazine.