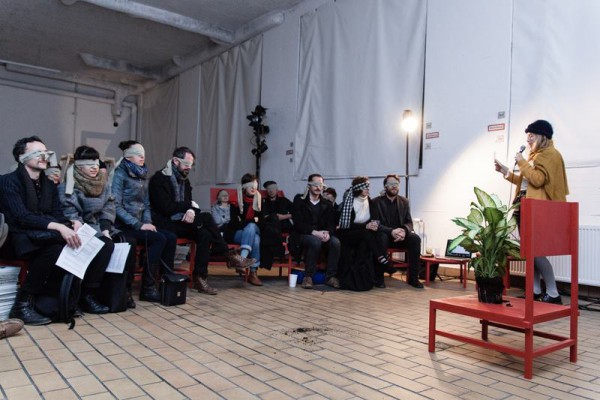 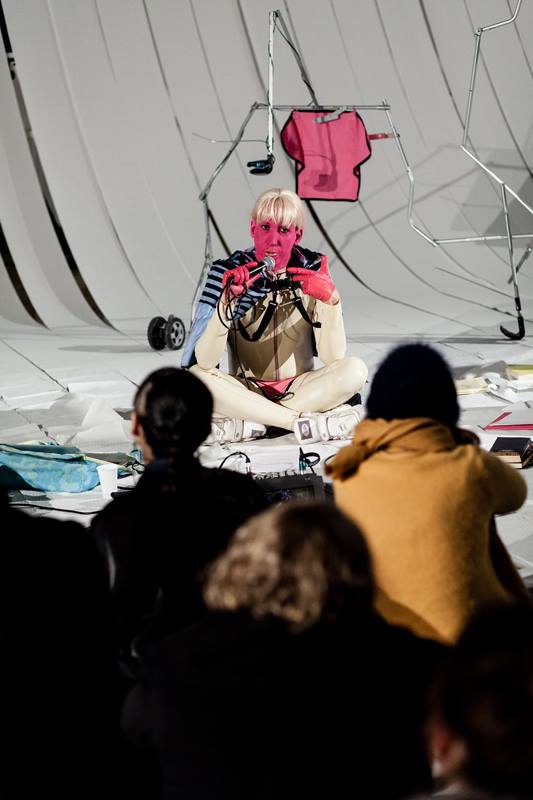 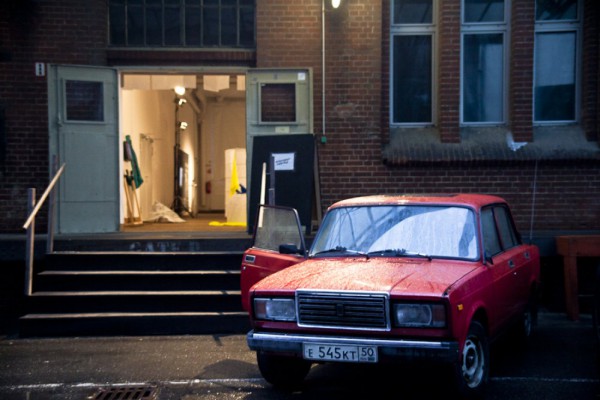 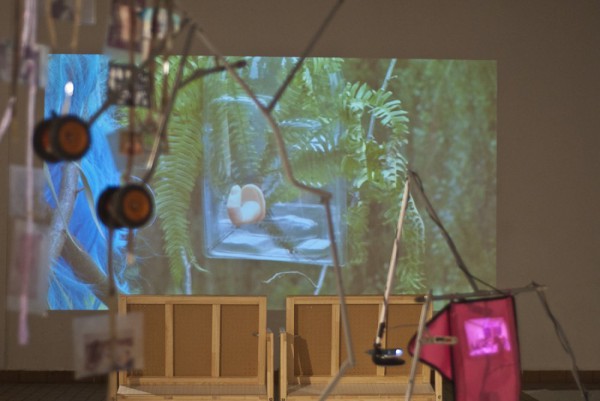 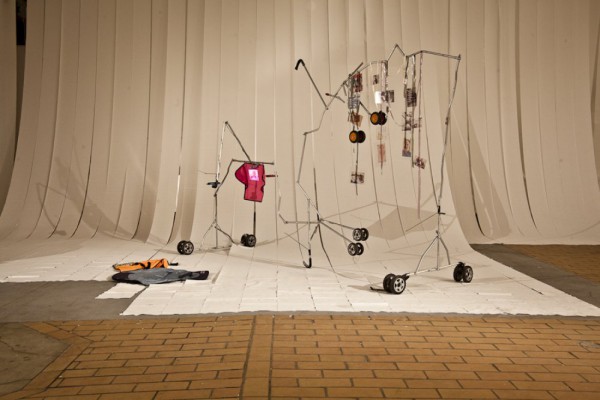 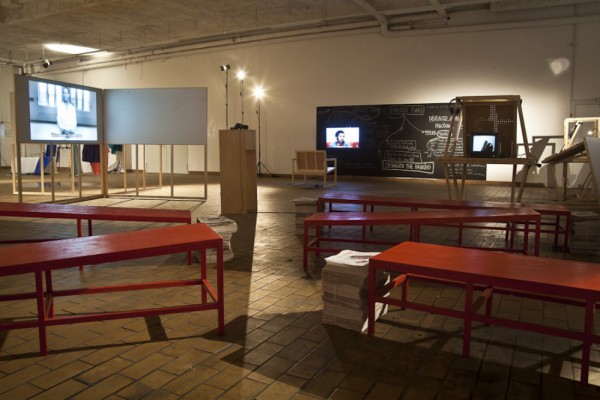 An art and research project by Suza Husse and Lorenzo Sandoval

I’m the platform that makes possible the materialization of political imagination.
Beatriz Preciado

Exercises of Critical Body Building is an exhibition and performance project, which opens up a rehearsing space for body-based knowledge production and non-conformist modes of operating within the ongoing research framework of dissident desire. The first chapter of dissident desire unites artistic ideas which question the body as a molecular archive of technological, ideological and economical fluxes and which record and enact forms of political subjectivity in the inbetween-room of precarity and desire.

With the urge of placing the body in the centre of social discussions, dissident desire traverses discourses and practices, which see the body as a political battlefield. Unfolding non-academic methodologies which emerge from the realms of informal, situated expertise, this project presents proactive propositions to question and interrupt the infrastructures, which produce, organize and normalize current body concepts and the respective conformation of desires.

Articulating this physical presence, the notion of unexpected knowledge is introduced: in looking for strategies of resistance and “ways of operating” as Michel de Certeau poses it, in places in which they are not supposed to be, dissident desire activates a movement of passage: How could this unexpected knowledge on the contemporary techniques of control possibly become a driving force for challenging our bio-political status proposing a critical counter-narrative?

The artistic projects presented in this frame conform a galaxy, which stretches out the subjects on display from a variety of perspectives. They broadcast from a spectrum of topics ranging from the informal mapping of transformations in urban environments (Reinigungsgesellschaft) to overcoming our dominant relationship with nature (M. Bonajo); from a study of trainings/ treatments/ physical improvements and emergent bodily knowledges (A. Frankovich) to the relationship between desire, possession and the extension of the mental map of the body (D. Maimon); from the embodied collapse of infrastructures which evoke situations of solidarity (M. Todorova), to the relocation of ideas within the senses and into movements (E. Haugh), to the interweaving of the creation of public space and the articulation of the human rights (L. Castro & Ó. Ólafson); from the reproductive techniques of futurist exploitation (J.P. Raether) to a master plan to expropriate money form the banks (N. Güell).

The Potent Self: a study of spontaneity, compulsion and resistance, Encounters by Alicia Frankovich

Alicia Frankovich confronts the viewer with a series of physical propositions taking the form of live encounters, instructional videos and objects. Closely related to the boosting and healing of the self as well as to forms of societal resistance, her work also raises awareness for the potential of self-agency and the kinesthesia of the body and mind. The treatments and methods, which are presented by various practitioners, range from illicit to holistic forms and medicinal techniques including Feldenkrais, sports science, drug use and self-defense.

Núria Güell’s Displaced Legal Application #1: Fractional Reserve (2013) proposes to apply the Fractional Reserve system to the banks, a law, which banks use for their customers. Based on her long term research in activist communities and in collaboration with experts from economy and law, Güell created various means to educate the public how to expropriate money from banks. First she carried out educational meetings with the expropriators Lucio Urtubia, Enric Duran and economist Qmunty, where different strategies of expropriation, as well as current strategies banks use to create money, got explained. Secondly, she published a manual containing those strategies, legal consultation and analytical texts. This manual is freely distributed in public places and online.

“What if spoken language was facilitated in taking a back seat allowing other means of response to come to the fore?” Emma Haugh asks. Within the reading troupe, the “readers” are invited to participate in an active embodiment of knowledge dissemination and production (through reflexive documentation strategies). Located between reading group and theatre rehearsal applying techniques by Augusto Boal, this intensive two-day workshop encourages each participant to become a critical agent who performs what might be living within the text Testo Yonki by philosopher Beatriz Preciado.

“How can we inhabit the street differently so that we can share the space in-between us in a differently functional and more spontaneous way?” This utopian question posed by Miryana Todorova is investigated through various media at the intersection of private and public space. The multidisciplinary project Expanded Objects for Shared Living: Free Delivery Service addresses the exhibition visitors as single volunteers and aims to activate unexpectable patterns of behavior. The videos on view document the development of the project prior to the exhibition at IKEA in the neighborhood of District: In exchange for a conversation about their thoughts and opinions on the topics of home, intimacy, desire, solidarity and collapse, the shoppers of interior furnishings were offered a free delivery of their purchases.

Since 2010, Johannes Paul Raether has examined the future of human reproduction and its relationship with capitalist production through his self-created, fictional character named Transformella – Queen of Debris. In the age of artificial insemination, pre-implantation, genetic diagnosis and hired surrogate mothers, human reproduction has taken on a globalized, industrialized quality. The Transformella Institute of Reproductive Futures makes a case for embracing the possibilities provided by innovative models of reproduction as controversial instruments in the political debate on self-determination, collectivity and society.

MΔTRIX BOTΔNiCΔ: Biosphere Above Nations re-shapes contemporary human / plant / animal rituals in a desacralised Western society. In this video, Melanie Bonajo relates to nature on the basis of constructing “the natural” as creative, self-directed and friendly other. In her work she disbands the model of human existence as one only minimally connected to the earth. MΔTRIX BOTΔNiCΔ shows a ritual in which the process of the “re-earthing” of modern individuals takes place. For dissident desire, Bonajo invites the visitors to develop an ecocentric perspective: “So, everybody in the spaceship please fasten your seat belts for a homecoming from humanly dominated philosophical attitudes back to the earth.”

The She The Same is a project in which the experience of our “true other” is set parallel to the phantom limb pain. By looking back at mythologies in which each human was once separated from his or her “other half” in the beginning of times, this “lost other” could be considered to be a phantom limb or body. This research project, developed with the help of a neuro scientist, explores the way in which bodies are constructed and perceived through a short film (30 min.), a performance and painting. Dafna Maimon questions if the idea of a “true other half” possibly is a tool for the production of expectation and desire of the capitalist romantic industry.