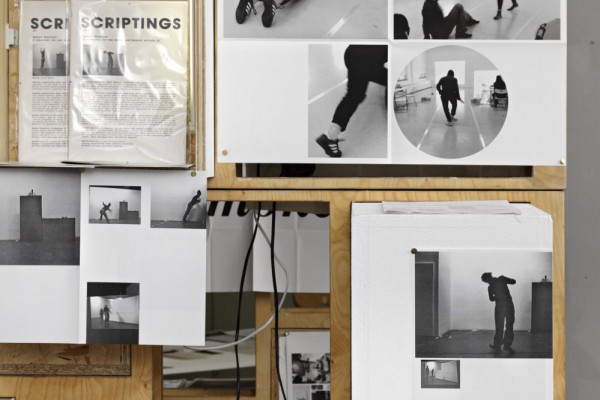 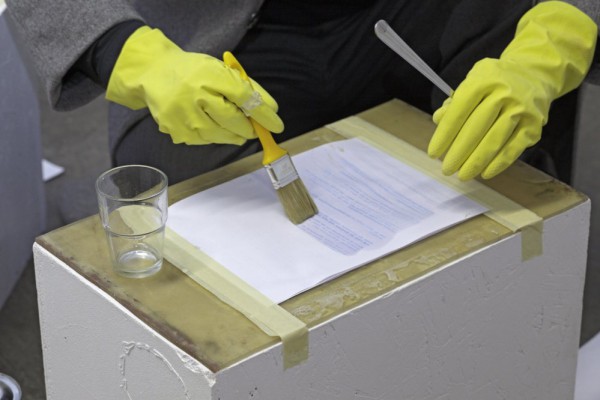 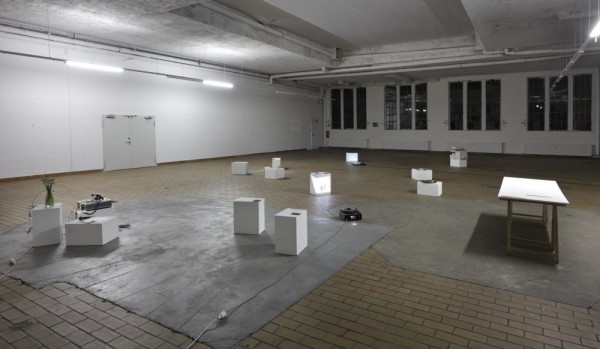 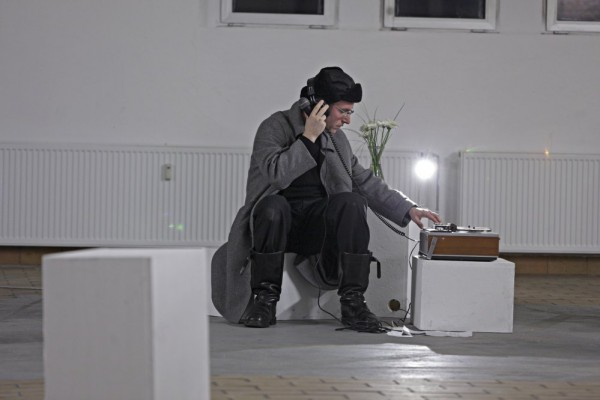 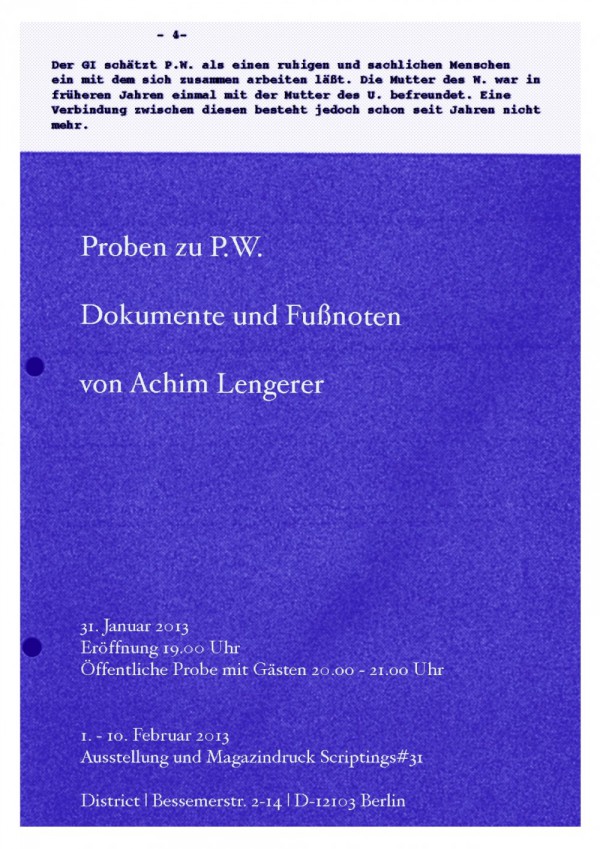 Achim Lengerer works with questions concerning language, which are addressed in performances, installations and publications. Rehearsing P.W. is based on research about the aesthetics of political speech in different archives from the FRG and the former GDR. In the public rehearsal, the artist presents written documents and sound recordings about the controversial East and West German reception of a play that premièred in 1970 by the author P.W. The rarely performed and today nearly forgotten Trotsky in exile led to literary and political contention in both parts of Germany during its rehearsals, before its actual première. The playwright P.W., until then highly successful and a member of the national theatre repertoire, is declared a persona non grata. In the West he is derided by the press, and accused of bourgeois, bureaucratic Marxism. The Düsseldorf dress rehearsal of the piece in January 1970 is stormed by a group of leftist students in a performative style, the rehearsal is aborted.

Lengerer questions the topicality of P.W.’s assertion that “the establishment of an independent artistic region” is “no longer possible”[1] and the historical symptomatology of a divided world emerging from correspondences, media articles, diary entries and surveillance reports. In Rehearsals of P.W., Lengerer puts the form and aesthetics of the societal (non-)negotiations that were triggered by this play to the test in a performance, and invites the viewers to take part in an evening discussion. The simple set-up, the attempt at a consensus between thought and action as well as the practise-oriented character of the production are inspirations from Brecht’s Lehrstücke (“learning-plays”), which Lengerer connects with the performance modes of documentary theatre.

In the exhibition, the documents, as well as the footnotes that are compiled with the aid of collective knowledge and live internet research during the rehearsal, find a spatial translation in the micro-spaces and variable constellations of the architectural sculpture by Luis Berríos Negrón. Similar to the public rehearsal, here it is also up to the visitors themselves to extrapolate correlations by reading, interlinking their own knowledge and the scripts to form a piece that is individual for each viewer.

The “rehearsals” remain suggestions and open play, facing historical and present failure. As experiments, they both open up productive interspaces, in which historicity and fiction interlink.

The materials of the Rehearsals of P.W. are published on the occasion of the exhibition as the 31. edition of the publication series Scriptings.
www.scriptings.net

Achim Lengerer lives and works in Berlin and London. Since 2009 he has been running the mobile showroom and publishing house Scriptings. Scriptings acts as a discursive platform, as a supplement and parallel entity to Lengerer’s solo projects. Artists, authors, graphic designers, performers and publishers are invited to participate – thus everyone who avails themselves in their respective production process of the formats “script” and “text”. Lengerer is currently working on a PhD project at Goldsmiths, University of London, UK, on the relationship between voice, notation and live performance.

Starting point for the series (Dis)playing paper, hours and constellations are different forms of art publication projects respectively artists’ expanded drawing and writing practices. Between January and May 2013, District Berlin presents four exhibition experiments and performative exercises under this title, which are developed by artists, theorists and curators from the edition and magazine formats Scriptings, VOLUME, SKULPI and the research project on contemporary musical notation, VISUAL AID.

In reference to the idea of a publication as discursive and social space emergent from a mental connection of readers and authors, (Dis)playing paper, hours and constellationsparaphrases selected publications and documents as notations for rehearsing temporary communities. Reading documents as scripts, sketches or scores for spatial arrangements of experiments or action motifs, the notational character or „future quality“ of these documents can be interpreted as a navigation for a hypothetic society of individuals, objects, images, sounds and thoughts.