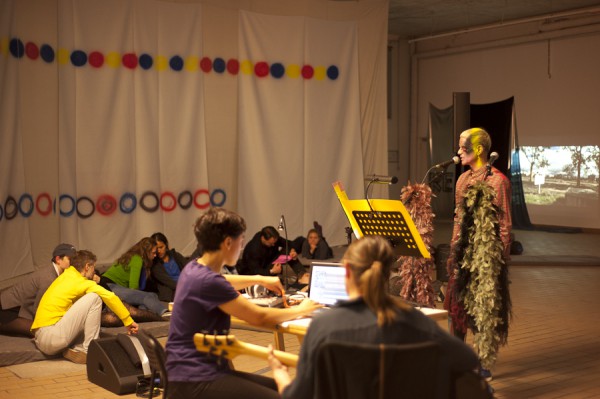 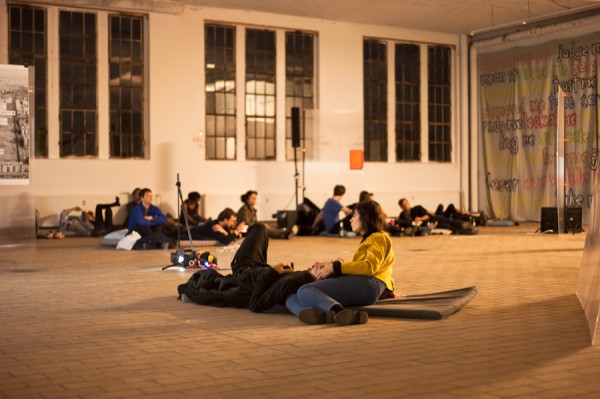 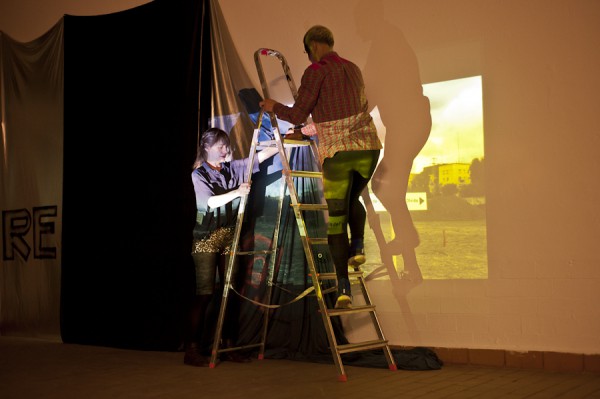 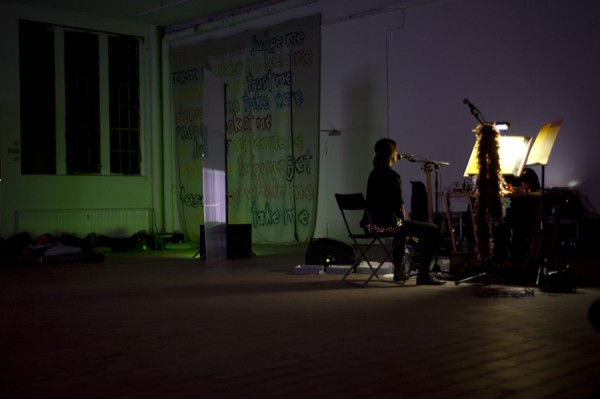 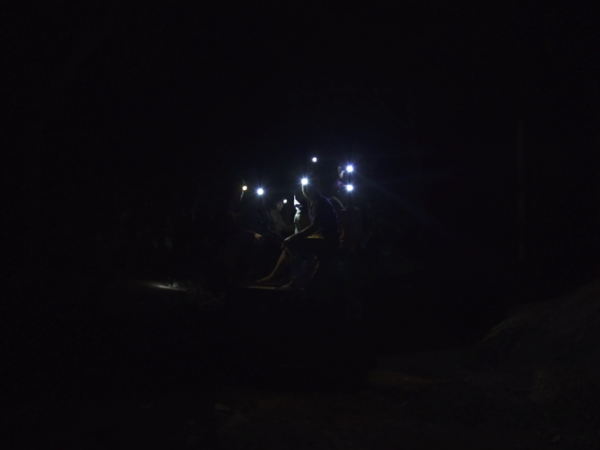 Installation in the making towards, during and after 20 May

Discoteca Flaming Star is an interdisciplinary collaborative art group, a group of people which uses songs and other forms of oral expression, understanding them as a personal response to historical events and social and political facts. Through conceptual, visual and musical transfers, they create performances, sculptures, drawings, stages and situations whose foremost intention is to question and challenge the memory of the public, transforming old desires and finding invented pasts, or pasts which never occurred. DFS is the place where the oracle speaks through the non-chosen. DFS present wonderful songs of love, consumption, fervour and feminism, carpets that help to cross burning bridges, fragile essays as drawings, and things that go together even though they shouldn’t…

In Sticky Stage Discoteca Flaming Star proposes a rehearsal situation the within a dystopian landscape. Three films Magician / Signs / Landscape (recorded in 2013 in Madrid), scripts with poems on posters, Dawn-Banners, big textiles that collect sunset and dawn, and Sonic Banners that calm soundwaves, create a place based on three settings: the periphery of Rome in Pier Paolo Pasolini’s Uccelacci e Uccelini (1966), a lot with 66 acres of emptiness in the former military barracks of the Franco regime located in the south of Madrid (entered by DFS with a magician in 2013), and the re-construction of the 1973 Polytechneio student uprising against the Greek junta by artists in exile and their allies in New York City in 1974 (Jules Dassin’s and Melina Mercouri’s film The Rehearsal).

With the same sensation we encounter these three settings: “in order to be here, in order to orient myself/ourselves here I/we need help; I/we cannot be here alone.” In Pasolini’s film help is rather uncomfortably contained in the figure of a black raven that constantly asks the protagonists about the direction of their journey. In the case of The Rehearsal it is the documents from Greece that build the support structure for the collective rehearsal of dissidence and activism and it is the music that enables transitions between inside and outside, here and there, then and now. In the case of the filmic scenes of the south of Madrid by Discoteca Flaming Star help is embodied by a pre-lingual magician, evoking Pasolini’s bird, who wanders around, next to signs that indicate poetical distances and locations.

PPP – The phases of the Raven

DFS – the phases of the magician

A tool to find
A lack of monitoring
A something with keys
A puppet with visible “hands”
A baby in Haute Couture
A magical thing
A prelingual seduction
A barely-knowledge
Valentino Valentina (from reproduction to production > Mary Kelley > Post Partum Project > another PPP)
An unknown vision of life
A dancer around scraps of poetry
No end.Laughter.Singing.Feathers downwind.

Sunday 14 May, 7 pm
The Rehearsal (1974) by Jules Dassin and Melina Mercouri, Film Screening

A rehearsed scene can be played and replayed, in a variety of ways, until it is firmly committed to memory. In rehearsing, outsiders also seek, through repetition, to understand what has happened and to remember it.  … The Olivier segment can be shown again. The poem by Seferis can be read again. The songs of Theodorakis can be sung again. The Polytechneio uprising can be remembered.
Marina Kotzamani

The 1974 film The Rehearsal made by Jules Dassin and Melina Mercouri was an impulsive and low budget production that ought to be a vehicle of solidarity with the pro-democratic movement in Greece. A Brechtian re-staging of a student uprising in Greece, the film was meant to inform about of the repressive brutality applied by the Junta and the complicity of the American government.

The Rehearsal is based on the crossing of two levels of narration. One is the narration of the filmic rehearsal itself (mainly assumed by Dassin and Mercury) and the other a sort of re-enactment of the recent historical events of the political life in Greece. In both levels of narration an interruption appears through the representation of the moment of going to sleep. In the case of the first one we see the participants of the film shooting leaving the location and going towards their home or hotel. They appear bound to each other by the enthusiasm of those who together are enabling something of deep meaning. Cut. In the narration of the events in Greece, there is a very perturbing scene in which the students who have occupied the University in Athens are going to sleep.

The images of the student’s bodies lying on the ground and on top of tables contain a filmic temporal impasse, in which the actual – already happened – deaths of students fallen in the military action of the Junta and the filmic deaths to come are evoked. As viewers of Dassin’s film we are assigned the task to guard the dreams of the students. In the two levels of the narration the moment of going to sleep knots the filmic temporality and its possibilities for dying, dying once again and perform the deaths of others.

Discoteca Flaming Star encountered The Rehearsal in 2014 when preparing to present Sticky Stage at The Kitchen, a legendary site for performance art and dance since the 70s in New York. The film was shot in 1974 in the same building inhabited by The Kitchen today. Working collectively, being interested in memory, sleep and empathy as artistic strategies, this encounter was and is highly relevant for the continuation of their work. To share and discuss the film with people in Berlin – where we live and where Sticky Stage is shown and performed for the first time in its entirety – the screening is the initial gathering as part of Sticky Stage at District.

The DVD-copy of the film is provided by the Melina Mercouri Foundation.

The performance is going over night and will last approximately 14 h. Bring sleeping bags, pillows, shelter, for the night… Mats and breakfast will be provided. Drinks and an evening meal can be bought in the space.

Discoteca Flaming Star builds a temporary space in which to take up our fatigue and our dreams in order to approach a tender imagination. Going over night the performance is an invitation to sleep in and on a stage suggested as a crossing of stages. The dystopic landscape of DFS’s films inhabited by the magician and the Dawn–Banners that claim the connection with the change of light, the temperature and the density during sunset und sunrise are mixed with melodies and songs from different sources: from The Rehearsal itself, Lana del Rey, Roxy Music, Virgin Prunes, Frederico García Lorca, Jimmy Scott and Rihanna. The long intervals of repetition of the different elements that constitute the performance are characteristic to group rehearsals. They propose a persistence, as the persistence of the bonding among the participants of a rehearsal and the persistence of the joy of making art. It insists on the fact that we will sing again the song, we will recite again the poem and the text and that we will sleep in the same space, dreaming together. Who will guard our dreams?

Together with Nguyen Phuon Linh, member of the Hanoi based Nha San Collective, we will welcome guests for a dinner and conversation on Monday May 22 from 7 pm. Inhabiting Discoteca Flaming Star’s Sticky Stage, the talk will evolve around the artistic and collective practices presented by Nguyen Phuong Linh, around ideas of art as a rehearsal of political imagination, around learning, memory and insurrection, and around questions of performance and community.

Linh Phuong Nguyen’s multidisciplinary practice spans installation, sculpture and video. Linh Phuong concerns about geographic cultural shift, traditional roots and fragmented history in Vietnam – a complex nexus of ethnicities, religions, and cultural and geo-political influences. Her works contemplate upon the visible/invisible truth, form and time, and convey a pervasive sense of dislocation and the ephemeral.
Linh Phuong Nguyen was born and nurtured by living among and working with many of the most respected contemporary artists of the Vietnam art scene at Nha San – the first non-profit artist run art space for experimental art based in her father’s home in Hanoi. After Nha San was closed down by state authority in 2011, Linh co-found and co-directed Nha San Collective, a group of young artists dedicated to pushing the boundaries of expression in Vietnam as well as supporting other young artists in the community.

Also we want to thank and send our love to everybody who helped to realize and produce this work. Kunstmuseum Stuttgart for producing the Sonic Banners, the film On the secret sea-shore rehearsing not known what for and the audio-work On a Sticky Stage. Stiftung Kunstfond Bonn for producing the Dawn-Banners and supporting the show in NYC. Andreas Koop in advance for designing and producing the upcoming publication. Paula Barrio Perez, Rafa Suarez, Manuela and Sofia Lomba, Kathy Homans and Patterson Sims, Alison Fleminger, Blain Kennedy, Annette Koelbl, Claudia Gienger, Olli Schenkmann, Martin Feldmann and everybody that have been and will be with us to see and listen and sleep.