Banner Study for an Agora 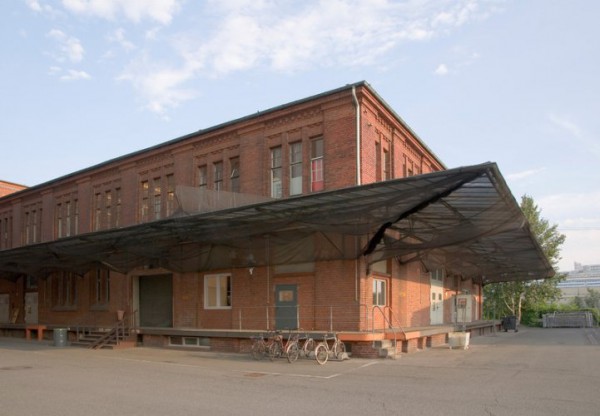 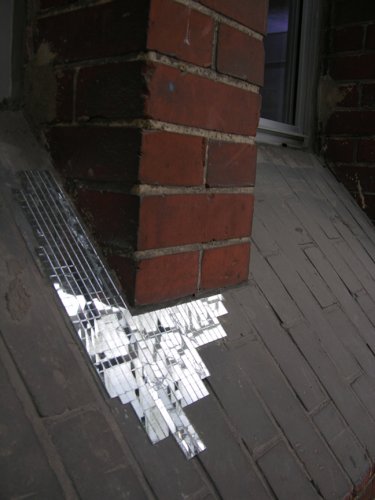 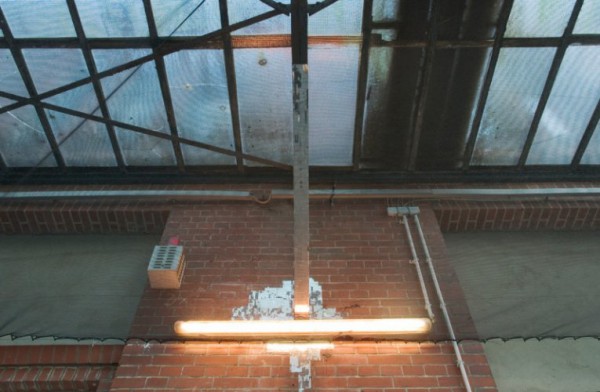 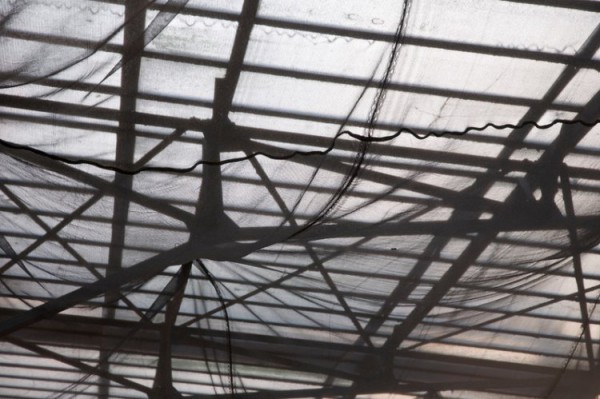 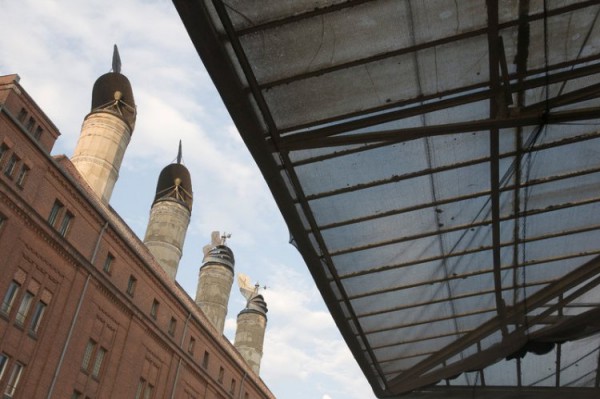 The interdisciplinary artist collective Discoteca Flaming Star, consisting of Cristina Gómez Barrio and Wolfgang Mayer, has been concerned with the development and staging of collective mental spaces in cooperation with other colleagues since 1998. Their sculptures, performances, drawings, films and songs revolve around moments and situations in which the visitors (can) become potential constructors of unforeseen and heterochronal actions. How does such a space of potentialities, a space in which time and reality temporarily dissolve, emerge?

The public art installation Banner Study for an Agora that was realised in April 2011 at the building of DISTRICT Berlin by Discoteca Flaming Star appears – at first glance – like an empty, unusable stage. A black scaffold net, tensioned in a denticular shape around the projecting roof of the building, at times flashing patterns of broken mirror spangles and oblong black shades on the ground of the platform are visible. The semi-transparent gauze, the sharp contours on the ground as well as the quick light reflexes contradict the monumental gesture of many public art projects. However, this seemingly random banner and its formal precision peculiarly come to conscious as soon as the visitors of this place in transition start to move.

The historical model for this project is supplied by the Agores of the ancient Greece in the 6th century B.C.. At that time, an agora was a large public place on which the citizens of the polis gathered in order to merchandise, to witness juridical acts and to attend theater plays, elections or religious processions. An interesting example for the productive utilisation of this cultic centre can be found in a project dating back to the 1970ies when the ‘Valparaíso School – Open City Group’, a collective of architects, students, artists and scientists, implemented an experimental and deconstructivistic model town called ‘Open City’ on the outskirts of the Chilean town Valparaíso. Here, a metaphorical architecture emerged that was supposed to make the integration of art, daily routine and life physically experiencable. In 1972, the French poet Henri Tronquoy, a temporary member of the ‘Open City Group’, designed the ‘Agora and Vestal’, an open cubicle – used as a working and retreat room – from which a long and uneven path extends into the desert. Discoteca Flaming Star reflect the Agora as a course for silent and soughing flows of thought and accentuate its dialogic dimension. They define the path along the cellars as a dynamic junction that allows apart from wandering, pausing, thinking and communicating even synaesthetical activities and experiences. The scaffold net that is tensioned around the projecting roof of the building serves as a conceptual banner, as a ‘fabric for thought’[1] that becomes charged with the ideas and feelings of the visitors. After sunset, lamps illuminate Banner Study for an Agora in a soft, skin-toned light that lets the functional architecture of the former industrial complex drift into an undefined, subjective reality.

Within the exhibition SAY IT LOUD. on words and actions. Discoteca Flaming Star presented the video Agora as actualization of their temporay art installation. The video can be seen watched at the DISTRICT office during the opening times from Tuesday – Thursday from 10–18 h.

Gomez Barrio has received prestigious scholarships, among others the Foundation Grant of Fundacion Estrenos, Spain (2013), the project scholarship of the senate Berlin, Germany (2010), the Whitney Independent Study Program New York, USA (2005-06) as well as the ISCP New York, USA (2003).

The artists live and work in Stuttgart, Germany.

A project of DISTRICT Berlin in collaboration with Malzfabrik.

Within the frame of ArtAndArchitecture DISTRICT since 2011 co-produces and presents site specific art projects which yield experimental perspectives at the intermediate zones between architecture, urban and social space, technology and art.