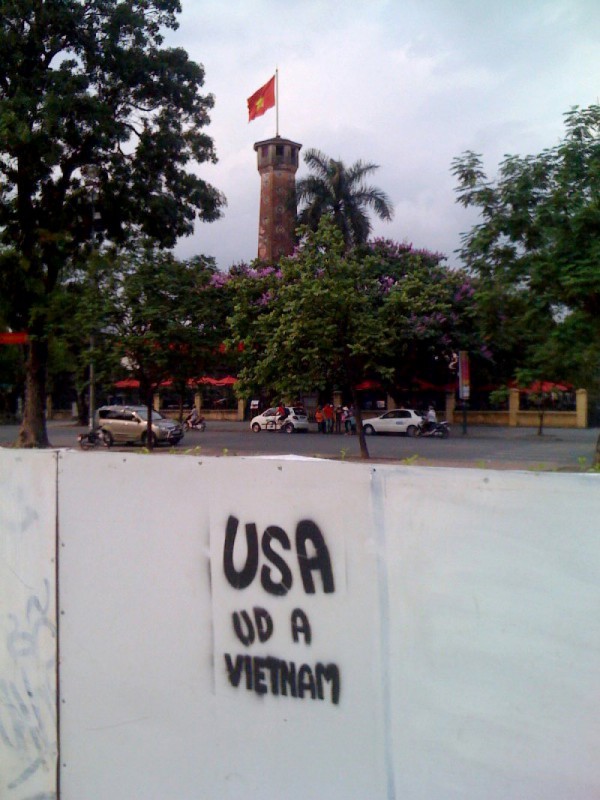 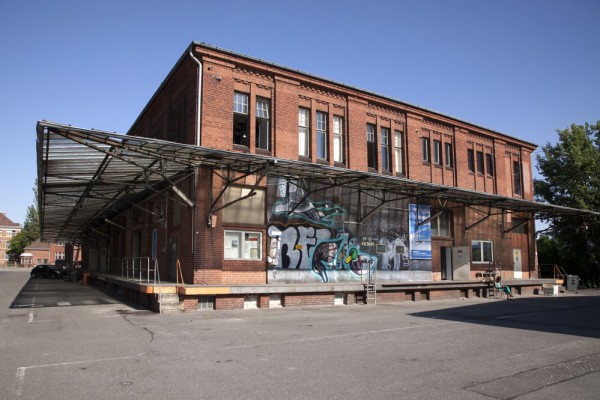 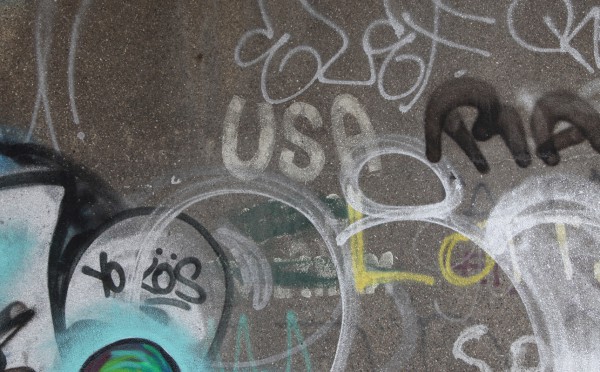 Opening hours: in accordance with our current office hours.

Khaled Barakeh’s mural Transmigrations (2013), a monumental as well as temporal poster art work on the facade of District, is the fifth project in District’s series AAArchitecture. Transmigrations was initiated in the framework of the artistic symposium ổn định động, which presented translocal perspectives on Vietnamese contemporary culture in and outside Vietnam. Barakeh’s mural is one result of an ongoing and evolving series of graffiti, video and foto art, and other interventions into public space that all took their departure from the artist’s discovery of a graffito which expressed political resistance to America’s intervention in the Vietnam war (1965-1975) in Copenhagen: USA UD A VIETNAM (English: USA OUT OF VIETNAM).

Incorporating not only the protest against ever current Western military exercise of dominion but as well the spirit of dissidence taken into the streets, the graffiti has been travelling to many countries of the Arab world, including Barakeh’s homeland Syria, to Africa, Asia and Europe.

Along with the mural, stencils of the graffiti are available in the exhibition space to be taken away and enacted in the various public spaces of the world, taking into account the participatory and mobile nature of the work. When pictures of these interventions are sent back to the artist, they add to the collection of images he presents as memories of a “shared resilience” that has no borders.

I first arrived in Denmark from Syria five years ago to study and further develop my artistic inclinations. On a recent journey back to Copenhagen I was invited to go walking with a good friend. She took me to visit a mural she had just finished in a vibrant immigrant community called Vanløse. There under a railway bridge, looking at her new work that took six months of preparation and organization, I had become completely overwhelmed by all the layers of paint and engaging conversations occurring across the surfaces. In that wall that defined some imagined border of a community, for a ground, for color and form, I could recognize names barely legible, under a history of intentional concealment. I got close to that wall and managed to make out two of the four words buried deep under veils of oil and acrylic; the names of two nations once engaged in a tremendous battle. Two other words I had never previously learned, but which my friend could easily translate for me were also hovering there in the wall, enacting their own meaning. . .

In that complex microcosm of geopolitical neighborhoods these hidden words reached out through a place and time that we usually consider as having had long past. Under generations of the streets activity, a slogan, a command had been covered up: USA UD A VIETNAM. I was struck. Shocked by the intentional layers of lacquer that had accrued over the years, obscuring the message, trying to hide it – a glimpse at a language that encompasses the struggle to Life without oppression or hierarchical domination – an arching script that resonates deeply with my own histories, experiences, concerns and understandings.

I hadn’t to think about it – we went and got a brush, my friend offered some paint, and with my highest attention to detail and precision, I withdrew the old text from the wall, filling in the positive space of where those words were once legible. The wall spoke again – directly, simply. I traced the fresh message from the wall to make a stencil and we left without too much trouble.

It was not difficult for me to make many stencils and send them out to my brothers and sisters out there in the networked world – to ask them to enable the stencils intentions. After some time I began to receive images from my colleagues with the glyphs of freedom, the hope, USA UD A VIETNAM appearing again across the planet. I collected all these images and made them into postcards, sending them in sets back to each person involved, amplifying and redistributing, gifting and sharing. I later placed 1000 printed sets in the exhibition space where people could just have them.

When those four simple words were beckoning from beneath a past that had numerous attempts at its total erasure and annihilation, I had had no conception or idea that it would take on such a life of its own, I merely felt the relevance. Now the graffito has a wider existence – in many settings and directions including and extending the original specificity in which it had so abruptly found me one cold afternoon in Copenhagen. The message is vibrant again – full scale at District – sharing walls that are not impenetrable, but that shift and transform with the pulse. In 2013 the original Danish stencil made its way into Vietnam, a country where there is only the first blossoms of a graffiti culture, let alone open cultural criticism – but its happening, its emerging – the message is spreading through their walls and cities from a younger generation with paint and a hope. This is the largest scale project I have been lucky enough to be involved in, but we do still need to increase our capacities, to amplify our spirit, our shared resilience and to direct all of our energies into the clearly visible, wide open future of our own making.

(born in 1976 in Damascus suburb, Syria) studied Fine Arts at Damascus University (2005) and holds an MA degree from Funen Art Academy in Denmark (2010). His works have been presented in Kunsthalle and Museum Brandts, and Ovegarden in Denmark, Kunsthalle Stuttgart in Germany, Golden Thread Gallery in Belfast, National museum in Aleppo, and many other countries worldwide. Currently he is finishing his Meisterschueler with Simon Starling’s class in the Städelschule in Frankfurt a.M.