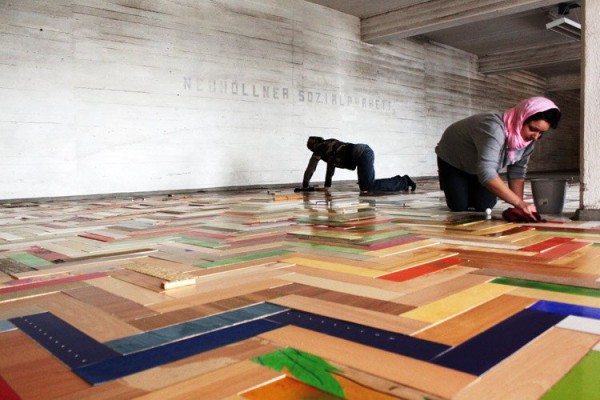 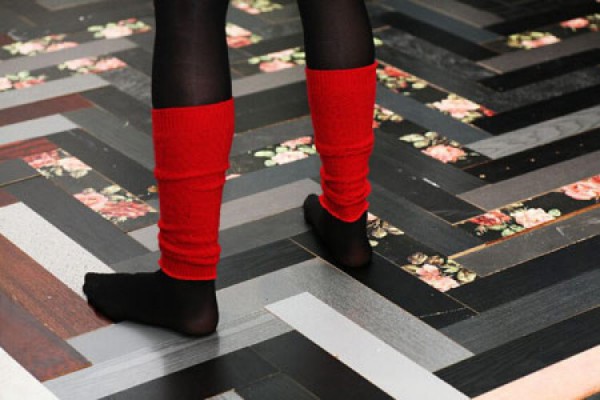 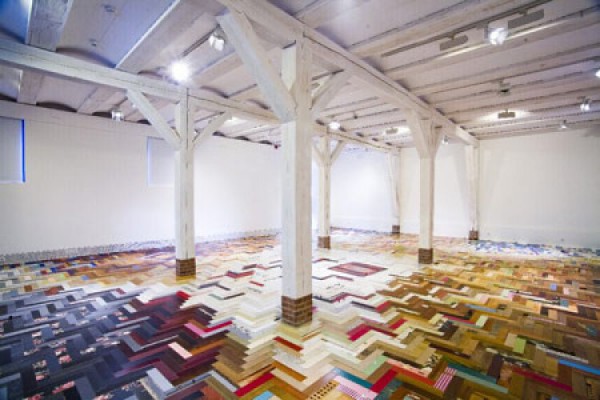 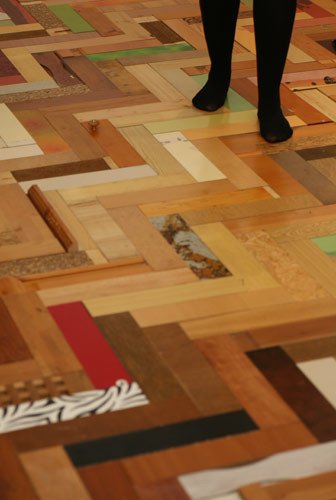 The Neukölln Social Parquet is a participatory art project by the artist Barbara Caveng. Dismantled table tops, shelves, cabinet doors and other discarded pieces of furniture from the apartments, basements, attics and garden sheds of the Neukölln inhabitants were collected from the streets of Neukölln and processed into a parquet floor over a period of several months. The social flooring, composed of about 3000 parquet pieces, was first assembled in the Museum Neukölln in 2010. From March 17 till December 31, 2011, the 100 sqm floor installation has been on view in the Malzfabrik.

The material of the Social Parquet originates from unofficial refuse dumps on the streets of Neukölln and the cellars or attics of the district’s residents: Muhammet’s kitchen table, a childhood bed that once belonged to Kerstin, Güler’s wardrobe, or Bernhard’s ship’s plank. The bed’s headboard and foot end were leaning on a tree in Bartastraße, Winnie the Pooh – carved into a cupboard door – had been “disposed of“ together with a pile of wood on Mittelweg.

These are among the circa 550 found items and donations which Swiss artist Barbara Caveng has used to compose her “social floor covering”. 4289 parquet pieces, sawed to the right shape by a craftsman, and laid out in a fish-bone pattern on 120 square metres, originally also known as “bourgeois parquet“. It is an installation to walk on, incorporating an echo of people’s stories within it. The stories of ten-year-old Sindi from Okerstraße, for example, who was born in Hamburg and thinks Hanover is better than Neukölln, and Andrea from Sardinia, who saw his first fox in Neukölln, or Bruno (64) from Hermannshof, who claims “Neukölln is my Mediterranean”.

Together with a team of six, barbara caveng – who has lived in Neukölln for just under three years herself – has gathered and processed wood of all shapes and types for five months: from plywood to fine teak, from broken boards to a complete cupboard. Painted remains of a kitchen bench were fetched from beside street trees, tables and drawers from street corners, a blue bedside table from the man with the whale shoes. Things that are no longer useful in life and people’s apartments now help to recount a drama featuring the people of Neukölln and their culture of life. Lovingly designed rose decor, painted animals and little hearts as embellishment, and the drabness of imitation wood – preferred type: light beech.

The wood was collected, cleaned and pre-sorted in a small shop on Okerstraße. This functioned as a place of contact and an exhibition space in which the course of the project was documented piece by piece: using photographs of the original pieces of wood in those places where they were found or together with their donors, while a close-knit net of bright red threads running across a map of the district located the setting of the photos and relevant streets. For three months, the “Social Parquet Space” became a meeting place in the Schiller neighbourhood. People got into conversation with their neighbours, and were able to ask the artist about the project and talk about their experiences in the neighbourhood or with the material they were donating. Notes were made in questionnaires about why people loved or hated Neukölln and about the stories behind the donations of wood. Doris provided the telephone bench of a dead friend in order to pay tribute to him as part of the “Social Parquet”. In the blog she writes about her friends, meaning that Erol K.’s memory is kept alive. She also cites the artist Lyonel Feininger: “Art is not a luxury but a necessity.”

Together with the “Art Parquet” and the “People’s Parquet” in Belzig, the “Social Parquet of Neukölln” belongs to a trilogy with which Barbara Caveng questions parquet as a material and a social phenomenon – sensually, poetically, aesthetically and critically. The focus is not on the floor covering representative of power, money or fame, but on an artistic symbol of and for people who are rarely given the opportunity to move on “grand parquet“.

Cosiness and drabness, individual and mass goods, the culture and ‘confinement’ of living – the full range of this highly problematic but also diverse Berlin district is laid out on the “Social Parquet of Neukölln”, ready to be walked on and experienced. It is a ‘carpet’ of sound composed from 4289 panels, hundreds of colour shades, comprising 85 per cent laminated pressboard and 15 per cent real wood of all types. 75 named participants and more than 100 anonymous individuals from the neighbourhood have woven into it their memories, a small part of their lives, their longings, hopes or even curses. It includes scrolls, dots and zebra stripes, plastic veneer and a green and white table-football game. A sound carpet comprising brash and quiet tones, with sensitive traces or rough scratches, collected in more than 90 streets of Neukölln – it is a symphony of woods that resounds in the museum.

In cut-out letters, a quotation from the work of philosopher Walter Benjamin adheres to a pink board: “Traces are the appearance of proximity, however far away that which left them may be.” A philosophical ‘inset’ contributed by Irene from Schillerpromenade. That is also Neukölln. Barbara Caveng has created a communicative installation in the “Social Parquet”; an installation that lends an aesthetic quality to the corners, hard edges and curiosities of this district, giving back some dignity to the people and the material used.

Within the frame of AAArchitecture District since 2011 co-produces and presents site specific art projects which yield experimental perspectives at the intermediate zones between architecture, urban and social space, technology and art.

She lives and works in Berlin, Germany.