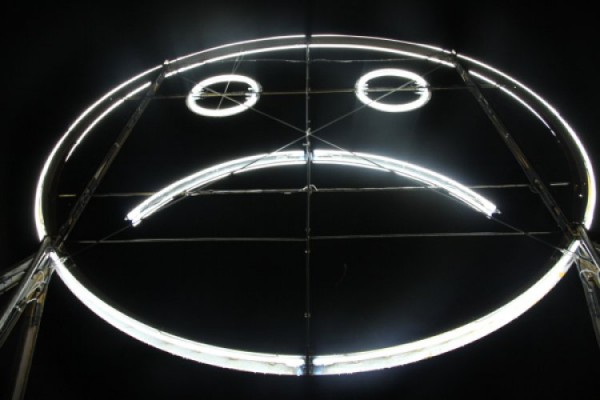 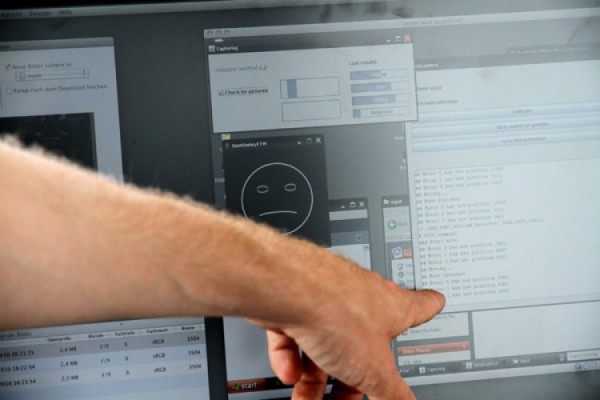 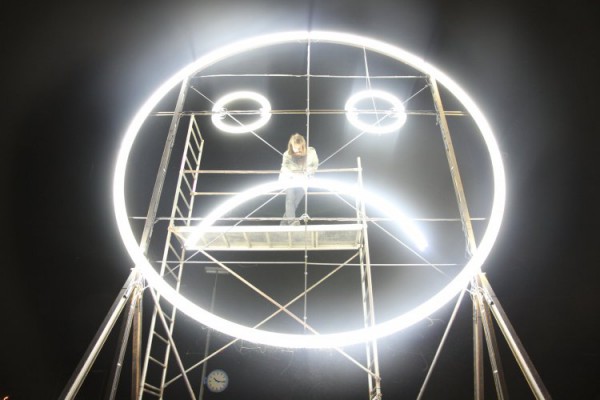 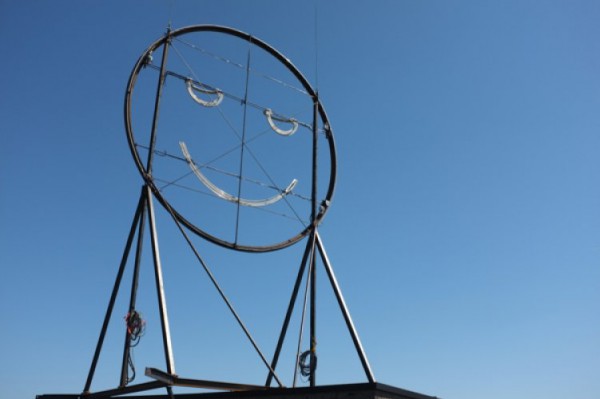 Artist Julius von Bismarck, experimental designer Benjamin Maus and filmmaker Richard Wilhelmer concentrate on public space as a discursive and materially contested site of negotiation as well as contemporary tactics of control in Public Face, the second public art installation of District. On top of the silo of the Malzfabrik building they will install an oversize steel smiley face with a flexible eye and mouth area consisting of bright neon tubes, which is visible from kilometres away. With the support of the Fraunhofer Institute, a software was developed which scans human facial expressions from nearby companies’ internal surveillance systems and engenders a reaction from the smiley: a ‘Public Face’, which analyses the mood of people at their workplace, abstracts it, and visualises it with minimal delay.

The smiley, icon of net culture, was invented in 1963 by the American graphic designer Harvey Ball to brighten the work climate of an insurance company. One decade later, the smiley was to accompany the transition from a disciplinary society into a flexible society of control, in the late 80’s it was declared the symbol of the Acid House movement, and in the 2000’s it became an irreplaceable surplus of digital communication. Currently, the network society finds a smooth placeholder for facial expressions as well as feelings and nuances that remain concealed in digital data transferral in the cool, embarrassed or ironic smiley. For their installation Public Face, the visual artist von Bismarck, filmmaker Wilhelmer and the designer Maus selected four moods which can be combined interchangeably. Happiness (symbolized by mouth corners turned up), sadness (mouth corners turned down), surprise (eyes opened wide) and anger (squinting). However, despite endless combination options, this “Public Face” remains a lifeless technological mask, staring at us out of the blue.

According to the cultural theorist Brian Holmes, IBM‘s personal computer was criticised as early as the 70’s as being an instrument and symbol of disciplinarian bureaucracy. Through the rise of this new ‘language and image machine’ (Brian Holmes), ‘artistic critique’ (Luc Boltanski & Eve Chiapello) received a quasi magical answer to its appetite for flexibility, autonomy, flat hierarchies and intensified identification. In the 70’s, the network society, immaterial work (Michael Hardt & Antonio Negri) and with it a completely upended post-fordian control and value system were born, in parallel, the smiley grinned on millions and millions of coffee cups, jeans, and bed sheets. Apart from the advantages of individualized work and physical and psychological mobility, the ‘personal computer’, the smiley’s big brother, possesses a control function regarding the private space of its users, and opens the gates to the world of speculative economics: the world of media, entertainment and the rapid commodification of culture. The smiley, the only anthropomorphic sign on the PC, evolved into a talisman of the future consumers, and is valid as an ageless icon of the global advertising industry up until today. In Von Bismarck’s, Wilhelmer’s and Maus’ Public Face the smiley becomes a potentially expressive sculpture, a medium which shifts from the personal computer to public space, reacting to its environment. But an interesting contradiction is inherent to the concept of “Public Face” – the promise to capture the feelings of the flexibilised workers in Berlin Tempelhof-Schöneberg with an algorithm, and the practical, theoretical and philosophical impossibility of this project.

The Public Face is a caricature of post-modern posing in business enterprises, just as “the public” is a collective invention and the countenance of a human face on the job does not reveal anything relevant about cultural formation and the capitalization of feelings. Therefore, the installation Public Face functions as a memorial, it recalls the progressive disappearance of private space through the ‘electronic collar’ (Gilles Deleuze) and artificially resurrects the oldest icon of the ‘semiotic economy’ (Brian Holmes) as a spectre. Moreover, it deliberately remains open, where the owner of the mimicked facial expression is, how and what she/he is working on and whether she/he agrees with being observed.

In the semiotic economy of network society, images and signs become commodities that stimulate our subjective interest, our attention and our passions. All information which Public Face conveys will fade into obscurity; the transitory nature of the smiley is its brand name in the virtual and urban world. In Public Face the decade-old weapon of the symbolic analysts becomes a mask-like emotional barometer, an indifferent robot gobbling up the paradoxes and ambivalences of our subjectification above the roofs of the city.

Within the frame of AAArchitecture, District since 2011 co-produces rtnd presents site specific art projects which yield experimental perspectives at the intermediate zones between architecture, urban and social space, technology and art.