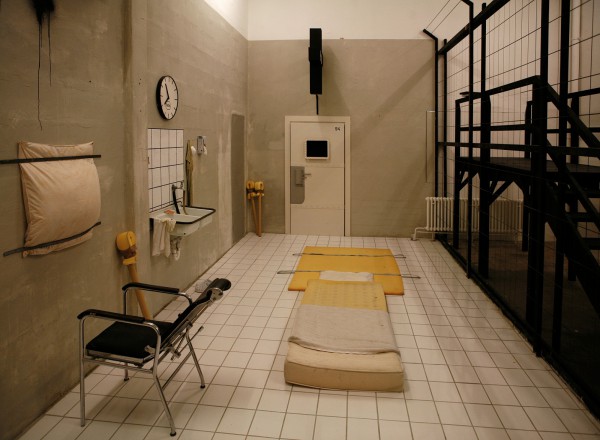 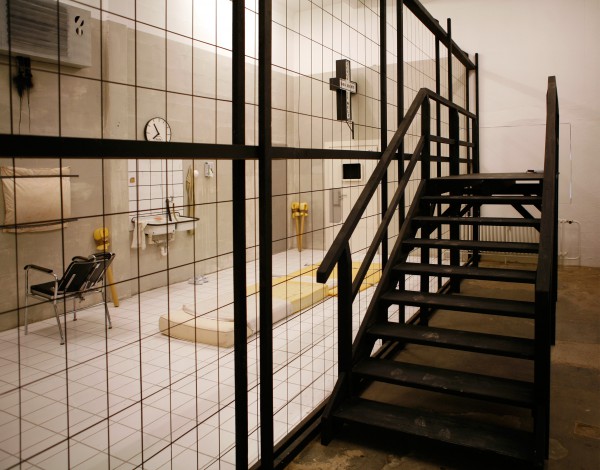 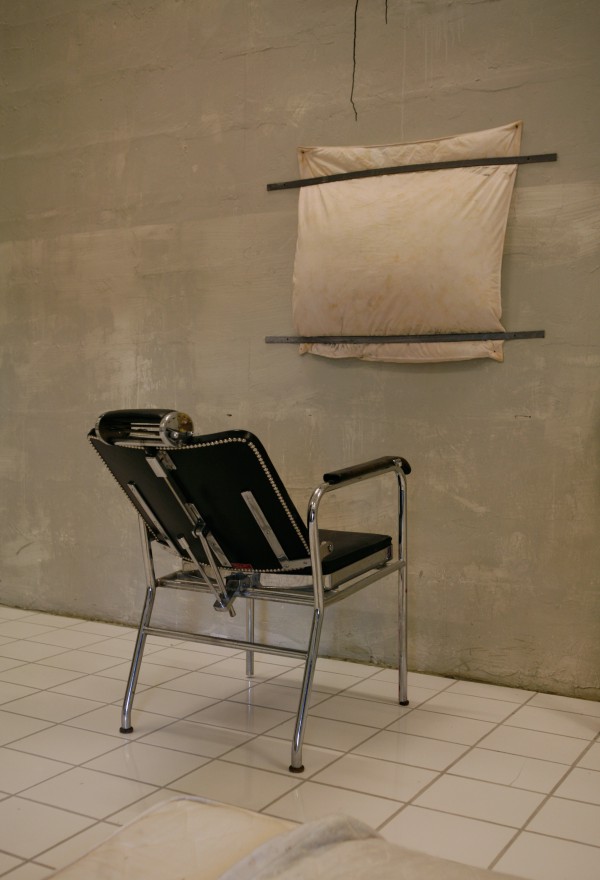 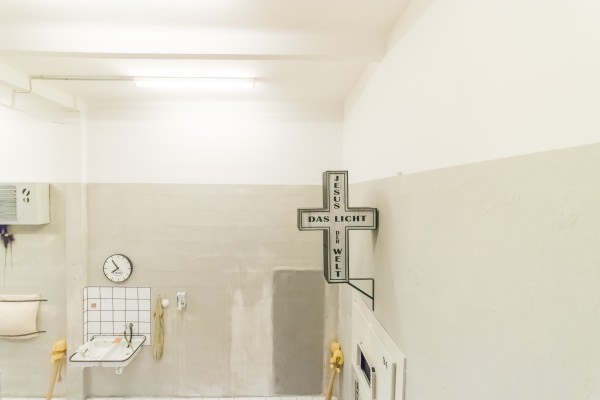 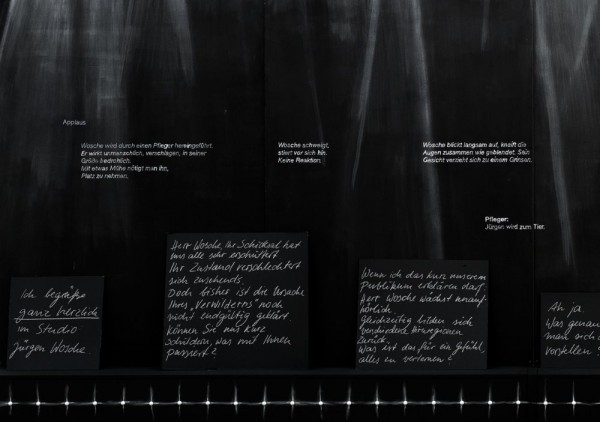 Opening hours: in accordance with our current office hours.

Jana Gunstheimer’s Genie (Labor) was first shown at Kunsthalle Bonn in 2008 and has now been further developed for District into a permanent installation in the historic Malzfabrik’s former technical services offices. The feral protagonist of the place, which depicts both a prison and a stage, is Gunstheimer’s fantasy character, Mr Wosche. From another work in the series, Genie (2008),[1] we learn that Mr Wosche is in the process of transforming into an animal form of existence: As his body grows incessantly, he forgets human language and refuses to follow norms of social conduct. In the figure of the “genie”, Gunstheimer combines the myth of inimitable spiritual faculties with the symptoms of so-called ’Wolfskinder’, wild children, who have grown up isolated from humans, amongst animals or in cruel captivity. Feral children, such as Kaspar Hauser or the girl Genie, who was found in Los Angeles in 1970, served as a projection screen of Western societies and have been recorded in the collective memory as scientific objects of study[2] or literary characters. These “savages” embodied the image of an “Otherness” from within the centers of “civilization”, which had to be disciplined and dominated by contemporary exorcisms of enlightenment and psychiatry.

In Mr Wosche’s apparently self-chosen state of neglect and isolation, another, likewise reversed ’Wolfskind’ figure of Modernism is echoed: In his story Bartleby, the Scrivener: A Story of Wall Street from 1853, Herman Melville describes the evolution of Bartleby, an office worker who increasingly withdraws back into himself in the course of the story, refusing to participate in the working community and thereby putting the norms and role models of early capitalist society up for negotiation. Whereas Bartleby finds his end in a prison or rather psychiatric ward, Mr Wosche’s exit according to Gunstheimer’s Genie/Talkshow (2008) is medially tamed and spectacularised in talk show appearances.

Located in Genie (Labor) is a tribune, an observatory of the cell in a dystopian experimental station. Visitors stand here, on the safe side of the ceiling-high bars, as if representing the research and monitoring team. Like a miniature panopticon, the architecture allows for seamless control of all proceedings inside the prison, becoming the physical parable for the current omnipresence of surveillance technologies. Michel Foucault describes the panopticon as “a form of political technology” through which bodies are implanted in space and individuals are divided in their relations.[3] This kind of hierarchic organisation, which defines centres and tactics of power, appears in Gunstheimer’s installation as a double stage. Whilst the audience’s perspective is directed onto the abandoned scene beneath them, their exposed position turns them into subjects of observation. Who knows, after all, what it is that is being investigated in this laboratory.

Within the frame of AAArchitecture DISTRICT since 2011 co-produces and presents site specific art projects which yield experimental perspectives at the intermediate zones between architecture, urban and social space, technology and art.

This framework has seen the realisation of Barbara Caveng’s Neuköllner Sozialparkett (2011), the installation Banner Study for an Agora (2011-2013) by Discoteca Flaming Star, and Public Face (2012-2013) by Julius von Bismarck, Benjamin Maus and Richard Wilhelmer to date.

___
[1] The series of works, Genie, was shown at Kunstmuseum Bonn (2008) as well as Kunsthaus Erfurt (2009) and is documented in the publications Nova Porta, Maßnahmen zur Bewältigung von Risiken unter Aufsicht von Jana Gunstheimer, 2010, and Jana Gunstheimer, Methods of Destruction, 2012.

[2] In medicine, “Wolfskind”-Syndrome, or rather hospitalism or deprivation disorder, describes the physical and mental concomitant effects of long hospitalisations, institutionalisations or imprisonment. Disorders of some animals in captivity are also covered by the term hospitalism. From: http://de.wikipedia.org/wiki/Hospitalismus

She lives and works in Jena.