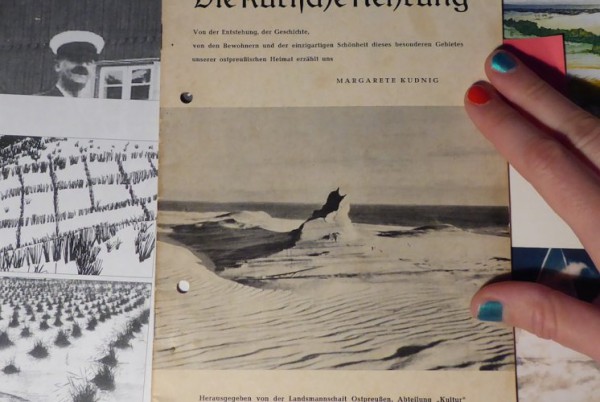 Tellings, readings and queerings with The Many Headed Hydra and Joerg Franzbecker

For 10 participants – please register at press@district-berlin.com until November 30, 2017.

East Prussia is a booklet from next door, a revenant in a colonial desert robe, a right-wing phantom in parliament. During their stay at Nida Art Colony The Many Headed Hydra found a publication in their neighbour’s library: The Curonian Spit in gothic type abouve a sand dune scene. Nolstalgia from afar, for home, for colony, for nature, for property, for past, for military, for border, for masculinity, for whiteness is speaking from the images, poems, histories and geographic data – assembled by the Landsmannschaft Ostpreußen (circa 1969). Anti*Preuß asks how to deal with the German nationalist, fascist, revisionist claims that are anchored in the history of German Vertriebene (expellees). How to queer the Curonian Spit and other post-imperial lands and seas and liberate the land and sea from backwards/forwards looking Prussian desires? The workshop is an invitation to think together, to talk and share ugly materials and empowering Anti*Preuß tactics.

The workshop takes place as part of the collective’s The Many Headed Hydra second project. WHEN THE SEA LOOKS BACK (A Serpent’s Tale) is a polyphonic oracle curated by Emma Haugh and Suza Husse that engages the sea as a mirror and the serpent as a trickster to weave tales from the crossings of landscape and body, technology and power. Looking back with the sea, The Many Headed Hydra fabulates a connection between the desert landscapes of South and North, of the parched Aral Sea and the Curonian ‘dead’ dunes that reaches across the aftershocks of an ecological modernity formed by colonial land use. Through practices from the fields of visual arts, performance, writing, music and philosophy, the oracles in WHEN THE SEA LOOKS BACK tell of diaspora and border cultures in deep time ecologies and of post-imperial interspecies transformations. Following serpentine markings of future, past and present coastlines by way of imagination, memory, oral and visual modes of transmission, WHEN THE SEA LOOKS BACK approaches the waters as historical topographies and political collectivities.