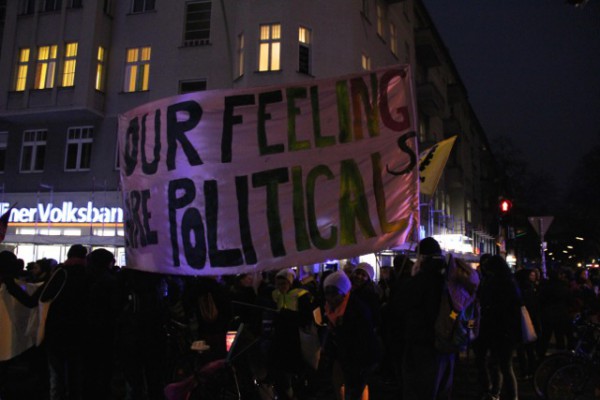 feminist health care research group, demonstrating on the International Day for the Elimination of Violence against Women 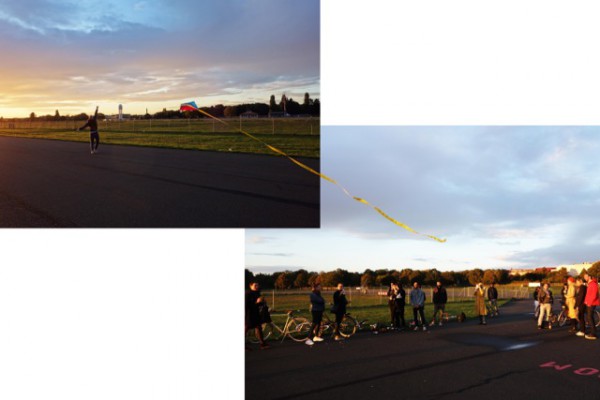 Queering Taste. The art of losing is not hard to master / though it may look like a disaster

Accompanied by music and visual movements created by Maria Guggenbichler and Amal Alhaag for the occasion, a set of materials from The feminist health care research group and a group of plants, we launch two fabulous zines into the world:

FRENCH KISSES: On Tips of Tongues, and Feeling as Taste
Compiled by Maria Guggenbichler and Amal Alhaag / Side Room, Amsterdam

What happens to that which sits on the tip of my tongue, that which I cannot speak, for psychological, linguistic or semiotic reasons, when we exchange kisses?

The publication French Kisses: On Tips of Tongues, and Feeling as Taste is loosely based, in conversation with and building on a 4 day informal and intimate gathering. During those days, we thought about forms of taste which do not stem from separateness, social distance or distinction, but are based on tasting as touching, being in touch, being touched and affected.

French Kisses: On Tips of Tongues, and Feeling as Taste was a gathering of a group of international cultural practitioners, guests, audiences and organizers, which took place from 17 until 20 September 2015 at District, at Berlin Community Radio, and in homes and at places across the city.

The publication is a re-mix of contributions by the participants Hannah Black, Olive Michel &Fred Hystère/Anna Frei, Girls Like Us, Max Göran, Annette Knol, Andreea Pavel/D.R.E.E.A, Lorenzo Sandoval, and Felicia von Zweigbergk as well as contributions by guests, audiences and organizers.

Together, Maria and Amal run the Side Room in Amsterdam (http://sideroom.org).

From November 21st to 28th we, the feminist health care research group, gathered at District to hold our second research meeting Sick Leave. We aimed to look at how our perspectives change through being ill.  We came together to see where our collective approach would lead us, to get to know each other better and to exchange practices, knowledge and experiences with health, illness, healing and self care.

Next to exercises in the group we visited the Antipsychiatric Information Center, Zieten Apotheke pharmacy and joined a demonstration on the International Day for the Elimination of Violence against Women (organized by International Women Space, DEST DAN e.V, Sosyalist Kadinlar Birligi, HDP Frauen Berlin, Kurdische Frauen Initiative and KNK Frauen Komitee in Berlin) and attended the book launch In our own words organized by the International Womens Space. On Saturday 28th we held the public workshop Political Feelings, a space in which we offered methods and exercise to engage with each other imagining practices and spaces for healing collectively.

During our meeting it became clear that we wont continue working as a group. But what we found out, what we want to preserve and what we want to pass on will be compiled in our second zine Sick Leave.

Both zines are a result of projects with the same title that were developed at District in fall 2015 in the frame of our series Curatorial Practices: Fields and Techniques. Both responded to our call for curatorial gestures themed Queering TASTE: The art of losing is not hard to master / though it may look like a disaster and were selected by a jury composed of Maria Thereza Alves, Suza Husse, Bettina Knaup, Nanna Lüth, Michaela Richter and Heiko Pfreundt.

Queering TASTE: The art of losing is not hard to master / though it may look like a disaster called for two project contributions to explore the relationship between art, education and research from the vantage point of artistic methods which involve collaborative scenarios for shifting dominant affinity networks („queering“). The Art of Losing described by poet Elizabeth Bishop offered an open frame of reference for ways of learning that feed from un-disciplinary modes of ‘getting lost’ off the established paths and strongholds of ‘correct’ knowledge, searching for such de-localisations and proposals for artistic knowledge production beyond institutional infrastructures.

Curatorial Practices: Fields and Techniques is a project series on current developments, problems and methods of the curatorial initiated by curators Suza Husse and Michaela Richter at District in 2014. Through the combination of curatorial gestures and specific workshop formats in the form of so-called Acts the series provides a platform for the reflection and reconsideration of curatorial approaches, attempts and attitudes in perspective to current developments. A long-term goal of these regular encounters and surveys in different formats is the lasting promotion of actual methods of artistic and cultural work that challenge established doctrines and policies by formulating extended, informal, speculative, experimental, dedicated, situated and critical points of views.