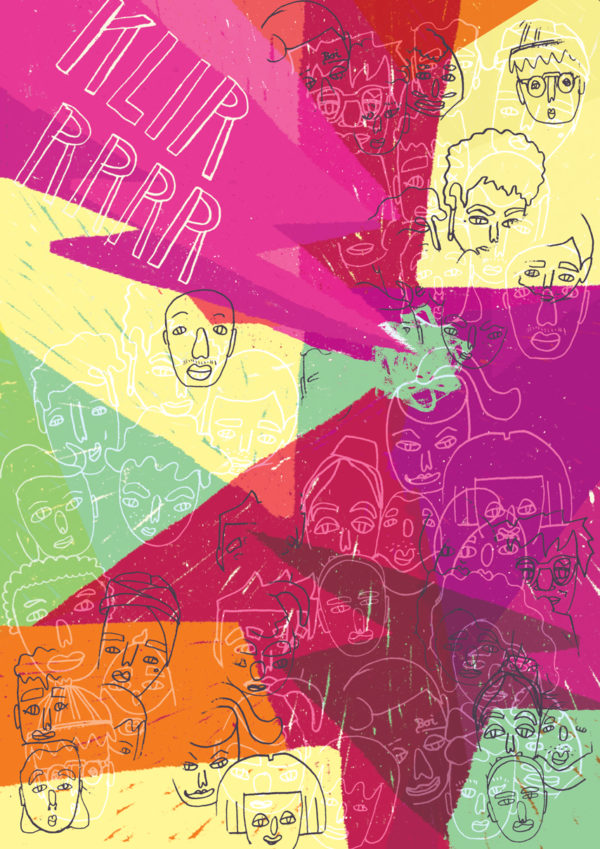 Conflicts are everywhere – they reveal themselves in bodies and feelings, in groups of friends and neighborhoods, in the city and in politics. Conflicts are part of planets, fantasies, languages, and ways of life. How might cultures of conflict look that do without violence and question normalcy? Can we understand conflicts as contact zones between divided worlds? As breaks in divisions and occasions for rapprochement and change?

KLIRRRRR festival means: music, videos, workshops, discussions, exhibition contributions, and performances by artists and activists who suggest inspiring means of dealing with current conflicts. In the contentious constructions of our festival architecture, fields of conflict and politics of the body, knowledge, health, inclusivity, access, the city, work, migration, ecologies, language, sexuality, technologies and different nasty-isms are brought to a RATTTTTLE.

Missy Magazine curates the KLIRRRRR Music Program with us, as well as the open blog workshop Kill Your Darlings. Parallel to the festival, District opens the exhibition Practices of Radical Health Care with the Feminist Health Care Research Group.​

6pm – 8pm: Video Art Channel
Bisheh by Mary Ana (2017)
The Reading by Adelita Husni Bey (2017)
Some Kind of Nature by Tejal Shah (2015)
Barikat by Mirkan Deniz (2017)
7pm: Video Conversation about Some Kind of Nature with Friederike Nastold (in German language with DGS)

noon – 8 pm: Kill Your Darlings
Open workshop for bloggers and those who want to start blogging, with Magda Albrecht & Leah Bretz
noon – 1 pm: How to blog (in German and English languages with DGS)
Introductory-Workshop
1 pm – 3 pm: What are queer cultures of conflict (in German language with DGS)
Workshop with Antke Engel
From 3 pm: Trickster Performance
by Vio G.C. (Violeta Garcia Claramunt)

Almost all of the festival contributions are offered with interpreters for German and German Sign Language (DGS). Communications assistants in German Sign Language additionally open up informal bilingual opportunities for discussion. The festival is accessible for wheelchairs. Please contact us regarding further information regarding accessibility for differently abled people. On both days of the festival we will offer child care for children aged two to twelve years old – a registration by 12 June is required: mail@caring-for-conflict.de
For detailed program information visit www.caring-for-conflict.de

Caring for Conflict is a project of intersectional (difference-traversing) learning and collective research that has taken place since Summer 2017 in the form of artistic projects in collaboration with various Berlin youth clubs, schools, high schools, and independent initiatives. We are searching for new ideas and new ways of dealing with conflicts. In their different situatedness, people (and other life forms) embody multiple forms of knowing and being in conflict. Youth cultures are based in such knowledge and every day practice. They are part of conflict- and counter cultures and provide inspirations for Caring for Conflict. Drawing from queer forms of relationality, struggle, and feminist concepts of care, we find artistic tools to be in this mess together and at the same time to dismantle the violence of inequality, exclusions, and rigid norms.