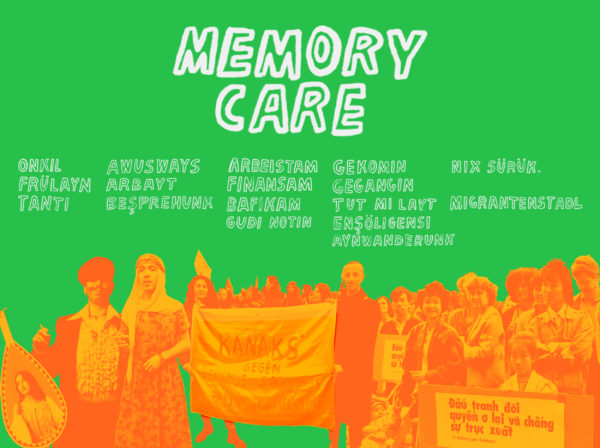 A project by Nuray Demir and Andrea Caroline Keppler

The official historiography of the peaceful revolution in 1989 and the unification of the two Germanys in 1990 is still dominated by a German majority perspective, in which migration history plays no role. Taking this historical void as a starting point, we would like to take the 60th anniversary of the West German recruitment agreements with Greece and Spain (1960) and Turkey (1961) as well as the 40th anniversary of the bilateral treaty between the GDR and Vietnam (1980) as an opportunity to bring together intersectional cultures of remembrance that take the post-migrant society into account.

We see the event series Memory Care as an attempt to counter the dominant narrative with intersectional memory cultures and to trace the stories of migrant workers and other marginalized protagonists. Using very different forms of protest and resistance, they have done important pioneering work and left an empowering legacy that is still very relevant. We want to make this legacy visible.

We bring together contemporary witnesses, workers, activists, artists, theorists, researchers and other protagonists to draw connecting lines from their shared experiences, create new alliances and strengthen existing ones.