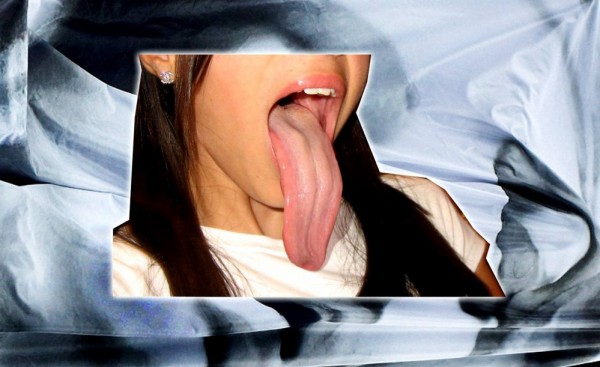 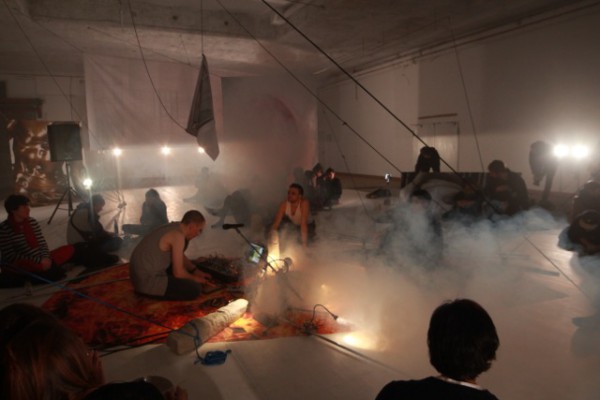 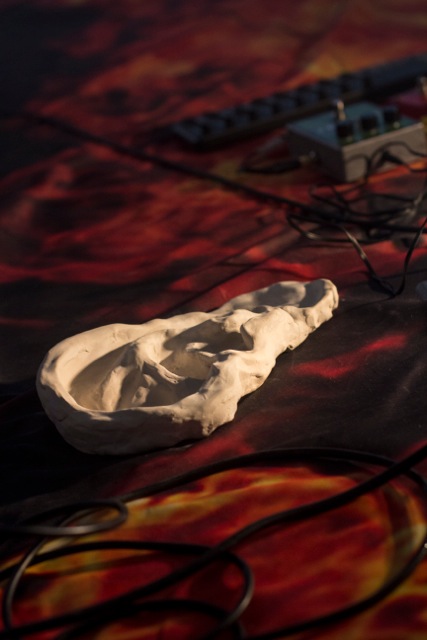 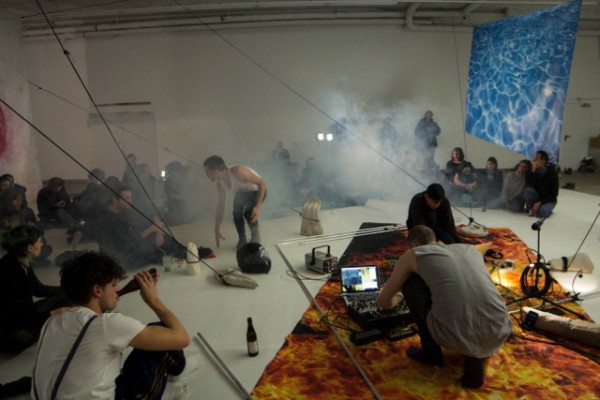 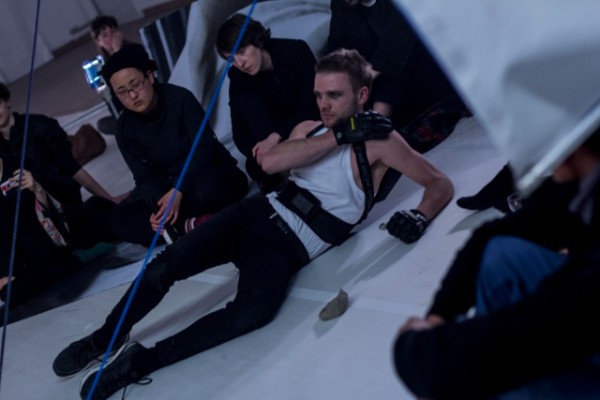 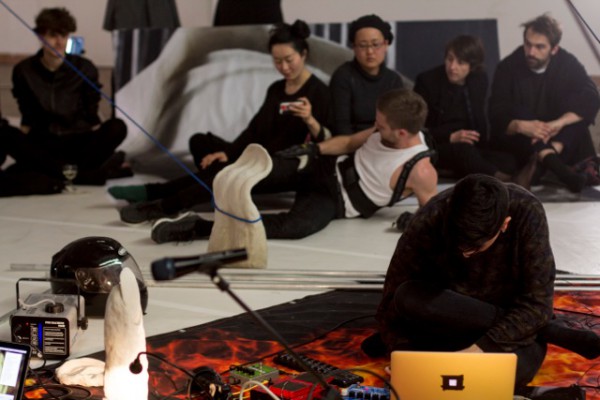 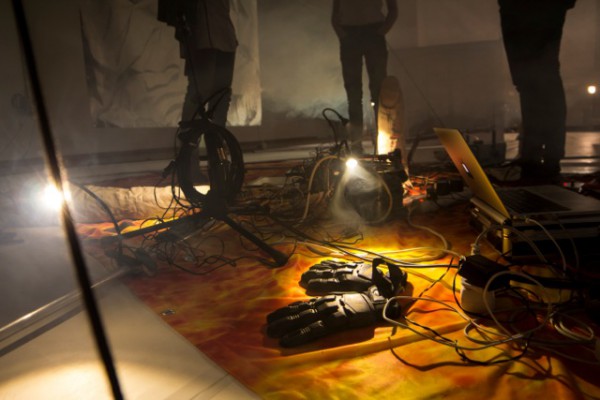 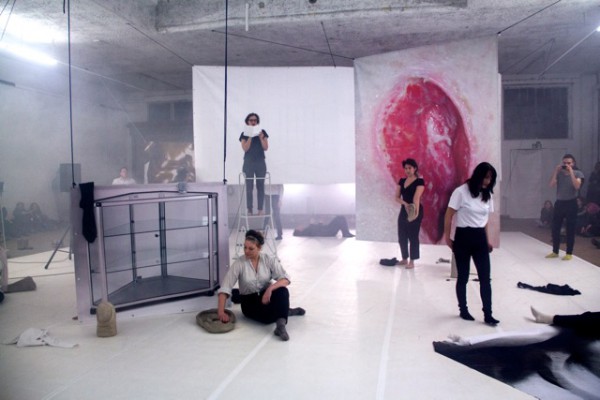 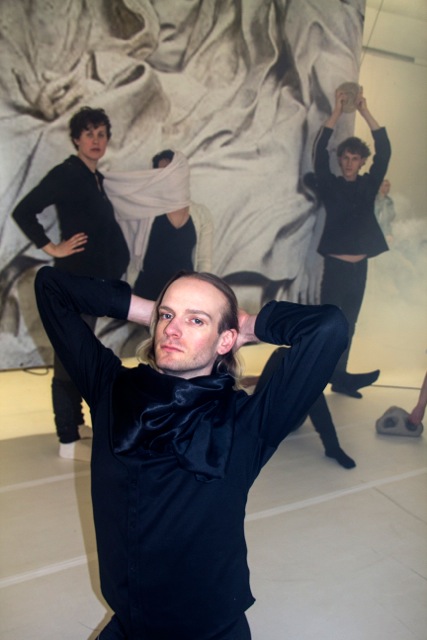 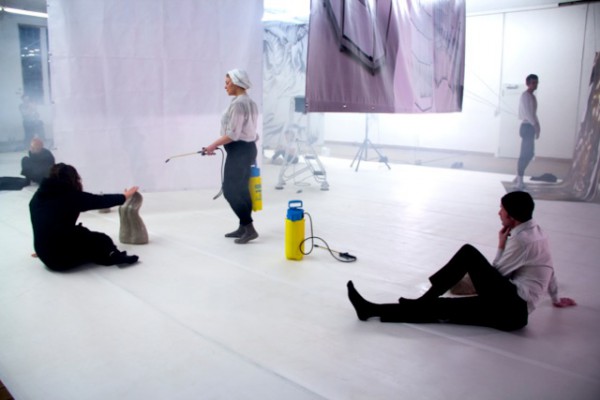 Julian Weber’s multi-platform, interdisciplinary performance and exhibition project constructing ruins explores the relationship between visual art, dance, and music as a collaborative process. constructing ruins (keeping it wet) at District manifests itself in a setting located between laboratory and workshop, club and stage where the physical conditions and inter-worlds of animate and inanimate matter are explored. The topos of the catastrophic herein becomes a territory of possibility, a space to generate interactions between objects and bodies.

As both a material and metaphorical paradox, the construction of ruins provides the point of departure for fragmentary, unfinished, and processual constellations. Materials like clay and aluminum rods compose figurative and architectonic structures. Computer images and textures alight from the screen to expand the spatial display.

In this humid, ever-transforming environment, Julian Weber invites musicians and visitors to explore the performative potential of a ruinous setting through collaborative, sculptural actions.  Enacting a hybrid figure which combines the tour guide and the obsessive compulsive looper, the performer, sculptor, and choreographer plays between different registers of the animate.

The Gray Voice Ensemble is a Berlin-based international and semi-professional community choir that sings the music of Albert McCloud, arranged and directed by the composer Elisabeth Wood. The forty member ensemble was grounded in 2013, presenting a new program each performance season, collaborating thus far with artists Tarren Johnson, Tomomi Adachi, Hanne Lippard and others, appearing at venues such as Taborkirche, Kühlhaus, and Museum Ludwig in Cologne.

There’s not much known about Laure yet.
She was always born in the last summer.
In her world, age doesn’t really exist.
It is a lie anyways.
Her gender is not clear.
If in doubt, say she’s a woman.
Laure doesn’t take commissions.
Her diet is air and love.

Laure Leander is the alter ego of Martin Hiendl, a Berlin and New York based composer and performer. His work started out in experimental concert music for acoustical instruments and has since ventured outside the traditional concert setting into interdisciplinary realms, employing instruments mainly in interaction with and/or through electronic means.

Stella Veloce is a Sardinian composer and multi-instrumentalist. Holding a cello degree, she is currently studying composition at the Universität der Künste of Berlin. As a composer she works in the fields of instrumental acoustic music, performance art, sound art and stage music.

Dmitry Paranyushkin is a Special Agent. Using network polysingularity as a methodology he is exploring the Plans B and C in a variety of mediums and contexts: from internet entrepreneurship, life sciences and software development to music, performing and visual arts. Born in 1981 in Moscow, he currently lives between Russia, Berlin and Paris. He studied Economics in Moscow and Biology / Life Sciences in Paris.

NEUNAU
The Earth was covered by ice and the landscape was that of an immense frozen desert. Boulders, rocks and sand were brought downstream by the slow invasion of the glaciers and crushed by their enormous weight, forging even harder rock in turn. Neunau draws inspiration from this natural phenomena, sculpting his indelible, ritualistic and furious expression into the materials themselves to the rhythm of an incessant heartbeat.

AERODYNAMIKA
The study of oscillatory patterns of movement in non-equilibrium states.
Polysingular rhythmical structures. Primitive cosmology.
Resident of the Local Prophets, 3AM, and the Special Agency. 78-150 bpm, 40-150 Hz.

constructing ruins (keeping it wet) is a project in the frame of the District series AAArchitecture.

Julian Weber is a choreographer/dancer and visual artist. Weber primarily focused on sculpture and installation while studying fine art at HBK Braunschweig and the Academy of Fine Arts Vienna.  He completed a BA in dance and choreography at HZT Berlin in 2013. Since then he has worked intensively in the interactive space between body, object, and movement. Over the past years, Weber has frequently participated in group exhibitions and performances, received international grants, and realized solo exhibitions. He works with artists like Meg Stuart, Boris Charmatz and Tino Sehgal and develops his own projects at the intersection of choreography and fine art. Weber is currently pursuing a masters in choreography at AHK Amsterdam.