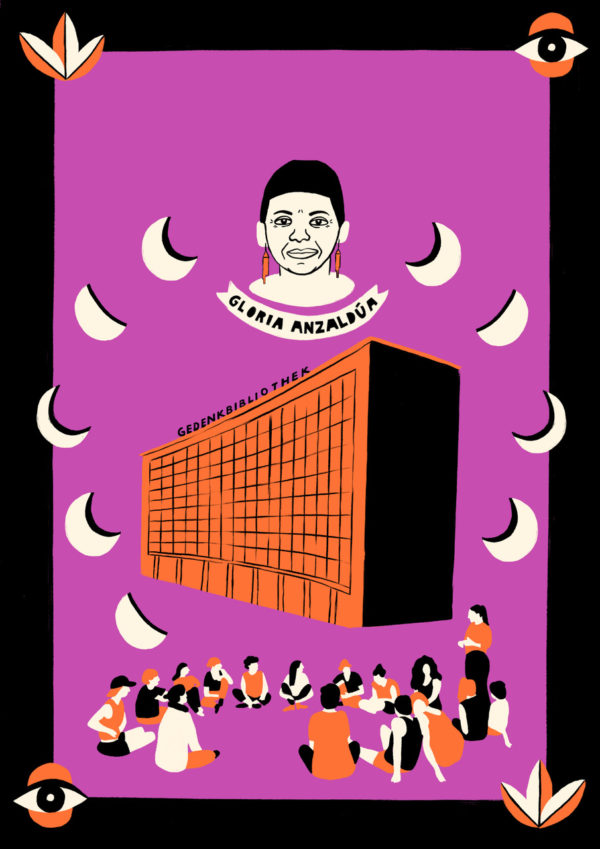 Lecture by Verena Melgarejo Weinandt, followed by a Q&A

The event will take place over Zoom.
Please register via the website of KW Berlin

Verena Melgarejo Weinandt is a German-Bolivian artist, curator and researcher. In this talk, she will present her recent project Nepantla Bibliothek, which she developed together with District*School without Center and in cooperation with sonntagsbureau. Nepantla Bibliothek consisted of a series of workshops held in 2019–20 at the America Memorial Library Berlin. The events evolved around the long overdue translation of the book Borderlands/La Frontera. The New Mestiza (1987) by Gloria E. Anzaldúa into German. As a self-proclaimed “Chicana, tejana, from the working class, dyke feminist poet, author-theorist” Anzaldúa (1942–2004) created a broad range of writings including poetry, short stories, theoretical treatises, letters, children’s books and other creative expressions. With the term “Nepantla”, Anzaldúa describes an in-between state – a place of contradictions, connections, and transformations. For this series, Melgarejo Weinandt invited artists, activists, and theoreticians who relate their work to Anzaldúa. Together they asked: Which forms of knowledge production and which marginalized voices can be understood differently, or maybe even better, with and through Anzaldúa in the German speaking context? How can we broaden the process of translating Anzaldúa and what can (un-)learning with her look like?

These collective reflections within Nepantla Bibliothek were based on the wish to contextualize Anzaldúa’s work in the German speaking context in a second publication accompanying Borderlands called Wissen über Brücken – Conocimiento sobre Puentes. Relating to Gloria E. Anzaldúa through Words, Visions and Body.

The event Nepantla Bibliothek – A collective translation of Gloria E. Anzaldúa’s work takes place in cooperation with the KW Institute for Contemporary Art, Berlin in the framework of the series You’re not muted. The project Wissen über Brücken – Conocimiento sobre puentes is funded by by the Senate Department for Culture and Europe.